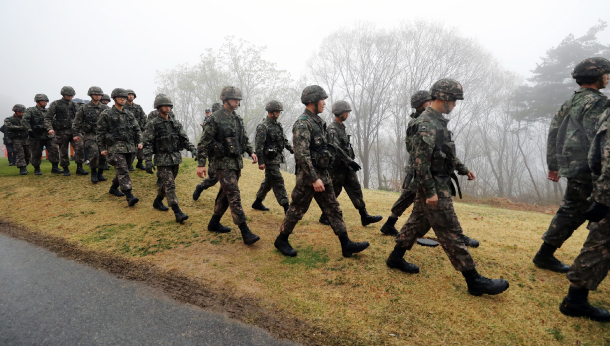 Soldiers are mobilized to search for an Air Force fighter jet that crashed into a mountain in Chilgok County, North Gyeongsang, on Thursday. The F-15K jet was returning to its base in Daegu after an operation when it crashed at 2:38 p.m. The Air Force said one pilot was found dead and the other pilot was severely injured. Fifty firefighters were sent to the scene but heavy fog obstructed the search and rescue efforts, authorities said. The ill-fated plane, belonging to the 11th Fighter Wing, was one of 60 F-15Ks the Air Force has been operating since 2005 as its main fighter jets. It is the first case of a fighter jet crashing since another Air Force combat plane, an F-16D, crashed in a nearby area in March 2016. [YONHAP]