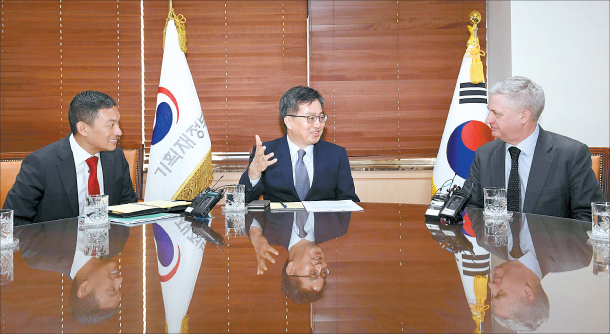 The geopolitical situation on the Korean Peninsula is turning positive for Korea as its economic fundamentals remain sound, a global rating agency said Friday.

A delegation led by Michael Taylor, chief credit officer at Moody’s, has been in Korea since Wednesday for meetings with officials from the Ministry of Strategy and Finance, the Bank of Korea and other government agencies.

Before meeting with Finance Minister Kim Dong-yeon earlier in the day, Taylor said he confirmed that Korea’s economy is very sound, and a rise in global trade is benefiting the national economy.

He said the rating agency is looking at how geopolitical conditions facing Korea will unfold going forward.

Moody’s checked the macroeconomic policies of the Moon Jae-in government, as well as financial issues like household debt, according to the Finance Ministry.

The country’s fiscal health and financial stability, along with trade issues and geopolitical developments surrounding North Korea, were all examined.

Moody’s upgraded the rating for Korea to “Aa2” in 2015, the third-highest level on the company’s table, while Standard and Poor’s also gave the country a hike to “AA” in 2016. Fitch has maintained its fourth-highest “AA-” rating for Asia’s fourth-largest economy since 2012.