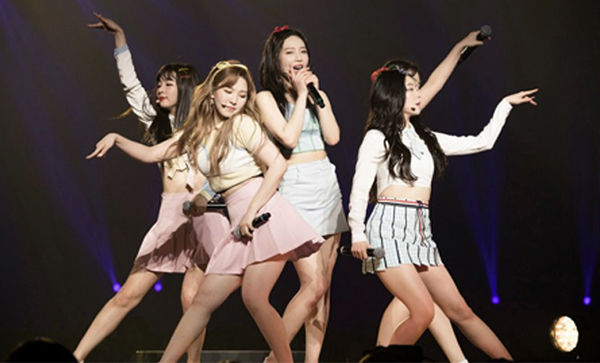 Cavorting in sparkly miniskirts and midriff-baring tops, the five members of Red Velvet, one of South Korea’s most popular girl bands, belted out one of their hits, “Red Flavor.” “We look good together, we’re pretty cool / I like it, it was love at first sight,” they crooned in Japanese, tossing their long hair and flashing runway-worthy pouts on Thursday night, as 10,000 fans at a Tokyo arena shrieked and waved bright pink light sticks in unison to the hip-hop beat.

Yes, but will it play in Pyongyang?

On Saturday, Red Velvet, along with 10 other acts from South Korea, will travel to North Korea to perform in concerts staged by Seoul as part of a campaign of cultural diplomacy. It is yet another sign of how the usually reclusive North Korean regime is strategically opening itself to the outside world as it hints it may be willing to roll back its nuclear program.

This week Kim Jong-un, the North’s leader, surprised the international community with a stealth visit to Beijing to meet with Xi Jinping, China’s leader. Early this month Mr. Kim issued an audacious invitation to President Trump to meet personally for negotiations. And on Thursday, officials from North and South Korea set a date of April 27 for Mr. Kim to meet with Moon Jae-in, the South’s president.

But before that, the North will welcome the emissaries of K-pop in the first appearance by South Korean artists in the North for more than a decade.

The symbolism of the visit is striking, given that the South Korean military uses K-pop for psychological warfare, blasting it from loudspeakers in the Demilitarized Zone that divides the two countries. Defectors from the North have been known to cite K-pop as one of their inspirations for escaping to the South. It seems odd that the autocratic North Korean regime, which has sought to cut off its citizens from what it calls “decadent capitalism,” is now rolling out the red carpet for these performers.

Red Velvet’s concert in Tokyo, attended mostly by teenage girls, was a nonstop cavalcade of overtly consumerist imagery. The singers enacted a pajama party where they tossed popcorn around a bedroom and sucked on pinwheel lollipops. In another scene, they wore candy-colored satin dressing gowns, twirling in chairs designed to look as if they were seated in a nail salon. Twice during the show, the women boarded carts built to look like circus animal cages and rode through the audience.

Pyongyang’s apparent openness to the South Korean performers “is part of this charm offensive to make them seem like a really normal country,” said Jieun Baek, a doctoral candidate in public policy at the University of Oxford and the author of “North Korea’s Hidden Revolution.”

When K-pop performers went to Pyongyang on several occasions in the early 2000s, the North Korean audiences “pulled faces or were expressionless because they were probably told to react negatively,” said Kang Dong-wan, a professor of North Korean culture and politics at Dong-A University in Busan, South Korea.

But now that the North has made dramatic advances in its nuclear program, it may even promote the visit as an achievement.

“The propaganda will say, ‘The South Korean artists came because we developed our nuclear weapons, and they are here to celebrate our nuclear development,’” said Shim Jin-sup, a retired psychological warfare officer in the South Korean military.

“South Korea is probably being played by Kim Jong-un, but still, there is nothing to lose,” Mr. Shim added. “Such cultural exchanges never hurt South Korea in the past.”

Analysts say the artists will probably give carefully vetted versions of their usual acts.

“Everything from their costumes to the choreography will be part of the performance negotiations,” said Darcie Draudt, a nonresident Korean studies fellow at the Honolulu-based Pacific Forum at the Center for Strategic and International Studies.

In an interview on Friday in Seoul at the offices of Mystic Entertainment, a talent agency, Choi Jung-in, 37, an R&B vocalist who is joining the Pyongyang tour, said her agents told her South Korean officials had asked her to sing “Uphill Road,” a hit from five years ago, because it “brought solace to people and touched their hearts.”

But Ms. Choi said she wasn’t thinking much about how the North Korean audience would respond. “There is no difference between music for propaganda and music for music to enjoy, is there?” she said.

Since K-pop performers last went to Pyongyang, North Korean artists themselves have started to emulate their Southern counterparts. North Korea’s Moranbong Band, often said to be Mr. Kim’s favorite girl group, has been known to dance in short skirts and high heels.

Still, some South Korean performers were evidently deemed too risqué. Although the South Korean government had hoped to send the global star Psy, the singer of “Gangnam Style,” as part of the traveling troupe, the plan did not materialize. A Seoul television channel, MBC, reported that North Korean officials had rejected Psy from the concert lineup.

The concerts are partly a reciprocal gesture from the South after the North sent cheerleaders and a performance troupe to Pyeongchang, South Korea, for the Winter Olympics in February.

Such cultural exchanges “can build trust between the two Koreas that are part of the same race and share the same language,” said Yang Moo-jin, a professor of North Korean studies at Kyungnam University in Seoul and an adviser to the presidential Blue House on the coming summit meeting between Mr. Kim and Mr. Moon.

There is no question that a fair bit of propaganda will be involved. According to the South Korean news media, several of the stars going on the trip this week, including some in their 60s, will perform North Korean ballads and other songs invoking peace and reunification.

The audiences for the concerts will consist mostly of elite, loyal cadres unlikely to undergo a sudden ideological conversion under the influence of a few K-pop stars. The South Koreans will perform on Sunday in a theater that holds about 1,500 people, and artists from North and South will perform together in a 10,000-capacity stadium on Tuesday.

“The North Korean authorities probably won’t broadcast the South Korean performances in North Korea,” said Mr. Shim, “either intentionally or due to lack of electricity.”

On social media in South Korea, fans generally expressed support for the artists’ trip. “If Red Velvet goes to North Korea to perform at a concert, half of its people would cheer and would want to be reunified,” wrote one Twitter user.

In Japan, some fans expressed fears for the performers. “Is it a safe country?” a Twitter user wrote. “In North Korea there is only one TV channel and people who listen to K-pop songs are executed, right?”

At the concert in Tokyo on Thursday, Rio Kikuchi, 20, a factory inspector from Iwate, said she was a little worried about Red Velvet’s going to North Korea. But Ms. Kikuchi, who feels a vague dread of North Korean missiles aimed toward Japan, said that “if anyone can help achieve peace, they can.”

In a brief appearance backstage by the members of Red Velvet, their minders deflected questions.

But when a reporter asked if they were looking forward to going to Pyongyang, Kim Yerim, who is known as Yeri, grinned and nodded. “Yes, yes, Pyongyang,” she said, and gave a thumbs-up.

North Korea’s decision to host a set of K-Pop concerts is an example of this kind of diplomacy. K-Pop is Korean pop music, and normally North Koreans are not permitted to listen to it. Yet, the regime will now host a set of concerts. Will K-Pop shape relations between North and South?

Watch the short K-Pop video in the New York Times article. If you were a median North Korean citizen, would you find South Korea more appealing after watching the video?

Does audience matter? After reading the article, identify who is likely to attend these performances. Are these figures likely to change their mind because of K-Pop?