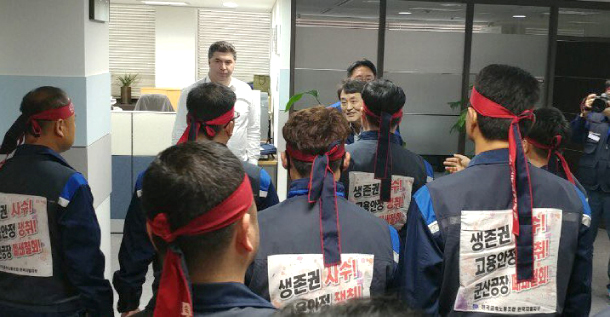 Unionized workers at GM Korea, the Korean unit of General Motors, on Friday asked for a meeting with the carmaker’s President Kaher Kazem following the company’s failure to pay bonuses.

“We have asked the CEO to meet union leaders to discuss the unpaid bonuses for about 16,000 employees. We are waiting for a reply from the company,” a union spokesman said over the phone.

The request comes after a group of GM Korea workers finished a stay-in strike at Kazem’s office at the carmaker’s main plant in Bupyeong District, Incheon, at 12:20 p.m.

But the company said it has not received any such request from the union.

“GM respects the right of the labor union to protest, but cannot tolerate this behavior, so the company has referred this incident to the local police and the Incheon Prosecutors Office, with an intent to file charges,” the company said in a text message sent to Yonhap News Agency.

In a message sent to employees Thursday, Kazem said, “Given the current financial difficulty of the company, regrettably at this time we are unable to make the second lump sum payment from the 2017 wage deal.”

As for the regular wage payment for this month, the company is making all-out efforts “to have sufficient funds to make such payments and will keep employees informed of the outlook,” Kazem said.

In the absence of additional funding from the company’s stakeholders, GM Korea will not be able to meet all of its financial obligations this month, he said.

As part of its global business restructuring, GM announced in February that it will shut one of its four car assembly plants in the country by May and has sought concessions from the union in wages and some work benefits so as to remain in operation. The demands have yet to be accepted by the workers.

The U.S. carmaker has also asked the state-run Korea Development Bank to extend a financial helping hand. The state-run lender will decide on whether it will extend fresh loans to the carmaker depending on the results of due diligence scheduled to be completed this month.

In the three years through 2016, GM Korea posted 1.974 trillion won in accumulated net losses due to a lack of new models and lower demand.