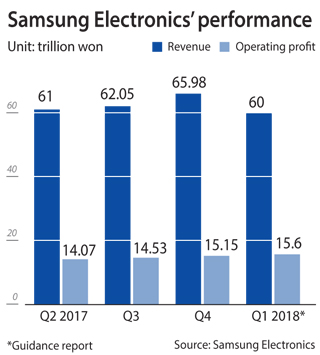 Samsung Electronics yet again broke its quarterly profit record on the back of red-hot semiconductor sales and the Galaxy S9 smartphone’s launch last month.

According to the Korean tech giant on Friday, its operating profits in the first quarter of the year increased by 57.58 percent compared to a year ago to a new record of 15.6 trillion won ($14.6 billion) and revenue went up 18.69 percent year-on-year to 60 trillion won.

Samsung’s announced operating profit was 1 trillion won more than the market’s consensus. The company’s operating profit has broken records for four consecutive quarters, since the second quarter of 2017.

The better-than-expected operating profit is due to Samsung’s strong performance in its semiconductors and IT and mobile communications divisions. Semiconductors play a vital role for the Korean tech company, and last year they accounted for 65.6 percent of the company’s overall operating profit.

Korea exported more than $10 billion in semiconductors this March in its highest-ever monthly sales, thanks to steady global demand for computer chips as technologies such as artificial intelligence, big data and cloud storage advance.

Samsung’s sales boost comes as its rival Apple has been struggling to sell its flagship iPhone X, and Chinese competitors like Huawei have not released any major new models recently.

Samsung’s guidance report did not give specific details about the performance of the four divisions of the company - semiconductors, display, consumer electronics and IT and mobile communications.

Meritz Securities estimated that the operating profits for the semiconductors division surged 79 percent since last year to 11.3 trillion won, while the mobile communications division shot up 64 percent compared to a year ago to 3.4 trillion won.

The firm expected the consumer electronics division’s operating profit to increase by 32 percent to 500 billion won. However, Meritz believes Samsung’s display business’ profit will plummet by 77 percent to 300 billion won.

The display business is believed to have been affected by the stagnant sales of Apple’s iPhone X, as Samsung is the sole supplier of the smartphone’s OLED screen. Goldman Sachs late last month lowered its forecast for iPhone sales to 53 million units as of the end of March, down 1.7 million units from its previous forecast.

Whether Samsung’s bullish performance will continue in the second quarter is in question, as Galaxy S9 sales are expected to slow and the Korean won continues to appreciate against the dollar.

The won, which was trading around 1,070 won to the dollar last month, has appreciated to 1,050 won since the beginning of this month as the U.S. Donald Trump administration has been putting pressure on Korea to increase the value of its currency.

“When the won appreciates to 1,050 won against the greenback, it will hurt Samsung Electronics’ performance,” said Song Myung-seob, an analyst at Hi Investment & Securities. “But it won’t have a critical impact on the company’s second-quarter performance.”