Back alley to boardroom - an unlikely CEO’s story

Back alley to boardroom - an unlikely CEO’s story 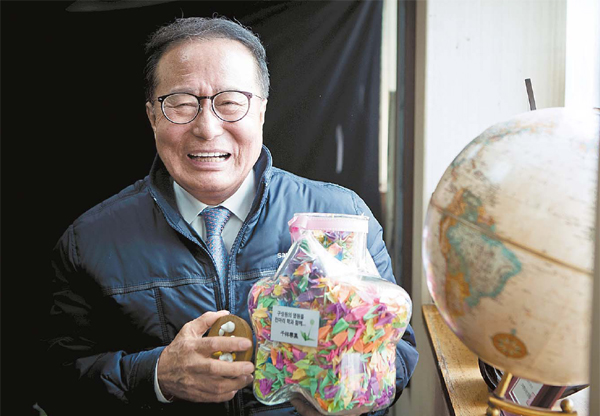 Koo Ja-kwan holds up a jar filled with paper cranes that his employees gifted him. [KWON HYUK-JAE]

Koo Ja-kwan went from scrubbing bathroom toilets to the CEO of a cleaning and facility management company after founding Samkoo in 1988.

From sweeping restaurants and shoe shining to charcoal delivery, Koo has tried his hand at pretty much everything.

But the 73-year-old, who never graduated elementary school, had his fair share of struggles before he found success.

Koo, who grew up in a shack in Mia-ri, Seongbuk District, central Seoul - at the time a major red-light district known for human trafficking and prostitution - often struggled with debt as several of his businesses failed.

In fact debt was a common theme in Koo’s life. After a factory he owned was completely destroyed in a fire the debt got so bad that he even considered jumping off a bridge to end it all.

But Koo learnt from his failures. The former charcoal deliveryman now runs Samkoo, providing cleaning services to some of Korea’s top hotels including, the Shilla Hotel, the Hilton Hotel in Gyeongju, North Gyeongsang and the Alpensia Resort in Pyeongchang County, Gangwon.

Koo sat down with the JoongAng Ilbo in his office in central Seoul last week to share his experiences and how he managed to find success.

Q. Fifty years is not a short time, but you were still able to create your company. How do you feel about your accomplishments?

A. My company grew from a street stall to a fairly big company. Because I endured many hardships growing up, I always say that I never want to go back to that time. I’m not extremely well off, but I like where I am right now the best. They say it’s better late than never.

Is it true that you don’t have an elementary school diploma?

Because my father’s business completely collapsed, I couldn’t pay the monthly school fee. Since I was young, there isn’t a thing I haven’t done, including being a paper boy, selling ice cream and memil muk (buckwheat jelly), shoe shining and charcoal delivery. I attended a high school at night that didn’t require a middle school diploma. In the afternoon, I mopped and swept the floors at a factory, and at night I went to school. I even got slapped across my face a lot by the factory owner who told me that I, as someone who has nothing, was crossing the line by studying.

After classes ended late at night, I would walk over an hour from my school in Dongdaemun to my shack in Mia-ri. If I saved up one month’s worth of transportation, I could save 500 won (47 cents), with which I could buy one book. That’s when I learned of famous writers like Shakespeare, Dante, Goethe and Dostoyevsky. There was also Ming Xin Bao Jin. Even now, they still feel new when I read them.

How did you come about starting your own business?

I decided to make brooms, mops and brushes on my own. Have you heard of the dollar debt? If you borrow a million won, you have to pay 20,000 won in interest every day. So my debt piled up. I was thinking about going back to shoe shining, but if you run a shoe shining place in a nice area like Myeong-dong [at the time], you had to pay about 5 million won in street tax. It was a time when I could’ve bought a 35-pyeong (1,245-square-feet) house for 500,000 won. The only thing a person who had nothing at the time could do was scrub the bathroom floor of a restaurant or building. I took to the streets with a bucket in one hand and a bag of hydrochloric acid in another.

Do you think you are quite settled and have a good grasp of your life now?

I created a company that wasn’t really like a company with two ajumma (middle-aged Korean women) in 1968. We cleaned and cleaned until dawn every day. As the economic development plan began picking up in 1960, Seoul saw an expansion of high-rise buildings. My excellent work ethic spread through word of mouth and I was introduced to new people here and there. I was even given the nickname “alley general.”

What does your company name signify?

I went to the judicial scrivener’s office without even a company name. When I explained that our company dealt with trusting people, keeping promises and seeing people as assets, the office named us Samkoo. They said it also fit in with my last name “Koo.” I made our company’s founding day May 15, the same day as teacher’s day in Korea, because I believe we have to respect our teachers. I also have a rule of three. It’s the promise never to officiate, lecture and run for political office. I don’t want to negatively influence others with all the pent-up anger within me over the years.

There are rumors that you once thought about committing suicide. Is that true?

In 1982, when I was making cleaning wax with my own hands, a fire erupted and I got third degree burns from it. The factory was completely destroyed, too, and I fell into great debt again. I thought, “there’s no meaning in living anymore,” and drowned in despair. I drank alcohol and charged down to the Jamsu Bridge, but I hit a pillar of the bridge.

Your company might not have grown to this extent. How do you feel about it?

In 1983, I was able to land a cleaning service for the space science expo in Jamsil, southern Seoul. I found 50,000 to 70,000 aluminum cans that visitors threw out after drinking from them. I sold the cans for 10 won each. Trash cans became a gold mine. Afterwards, I was able to get back on my feet by working at big events. My costumer base continually expanded.

It seems you have endured all sorts of hardships throughout your life. How has that influenced you?

I owe it to the people who work in areas that others generally try to avoid. If it weren’t for them, I wouldn’t be here today. At our company, we call every cleaner woman and man “teacher” or “madam” or “sir,” because everyone deserves respect. We also make business cards for everyone in the company, so that they can be confident in front of costumers. I turned over 47 percent of the company’s shares to the employees. My family doesn’t even own any because they never personally contributed anything to the company.

Out of 1 billion won in sales, we gain a gross profit of 100 million won. That’s only about 1 percent [in gross profit]. About 90 percent of our workforce is made up of permanent employees and 100 percent of the payments received from our customers go back to the employees who put their sweat and hard work into their job. We, of course, also take care of their insurance and pension plans. The company runs on a commission policy where everyone makes their own bread and butter. It is abnormal to save up profits. People are more important than money.

What are your views on outsourcing?

There are about 60,000 companies nationwide which outsource. Many small companies hire an employee for 10 months before firing them, because then, they don’t need to provide severance pay and also cut back on the costs of insurance. Though I shouldn’t pick on companies like mine, many of them use these wrong measures.

Did the new minimum wage policy affect your company?

All our employees already receive more than the new minimum wage. Though I am a bit wary of it, I don’t think there’s much significance in the divide between permanent and temporary employees. As time goes by, the job market is splitting off. With an aging population, we are also facing an increase in part-time jobs. Danish company Integrated Service Solutions (ISS) has 55,000 employees in total with sales up to 13 billion won. They rival the whole continent of Europe. We are also planning to expand our business to the United States, China and Vietnam.

I finished college and graduate school in my 60s. I graduated from Yong In University in 2004 and got my master’s at Sogang Business School in 2009. Learning is a lifelong hobby. People ask me if I’m not going to get my doctorate degree, but I think that’s just up to the scholar to decide. I’m planning on making a scholarship foundation with 51 percent of the shares I own. It’s my own little wish to reduce the number of young people who can’t receive an education because they don’t have enough money.