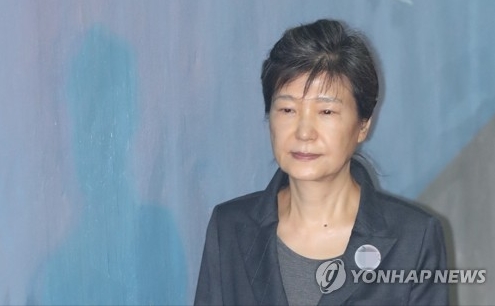 “Park, in conspiring with Choi Seo-won, better known by her former name Choi Soon-sil, requested and received bribes worth over 23 billion won,” said Judge Kim Se-yoon of the Seoul Central District Court. “When a culprit receives a bribe worth more than 100 million won, he or she can be sentenced to life or to more than 10 years. Her fines were calculated based on the laws she has violated.”

Of the 18 charges of corruption and power abuse the prosecution had levied against Park, who did not attend the sentencing, the court found her guilty of 16. They include forcing conglomerates to contribute 77.4 billion won to two non-profit foundations Choi controlled.

The court said she is also guilty of receiving bribes worth 7.2 billion won from Samsung Group, though it cannot determine how much she kept for herself.

“Park abused the power given to her by the people of the country and conspired with Choi to demand bribes from companies and meddle in their business decisions,” Kim said. “She abused her power as the president and received 14 billion won worth of bribes from Samsung and Lotte, and requested 8.9 billion won from SK Group.

“She additionally blacklisted cultural figures based on their political leanings,” Kim said. “When her crimes came into light one by one, it threw the country into confusion. She has to take heavy responsibility to make sure these misdeeds are not repeated.”

Park’s verdict, which lasted nearly two hours, was broadcast, the first time that the verdict in a criminal case has been aired live in Korea. Though she filed an injunction requesting that only a section of the hearing be broadcast, the court dismissed it. The court earlier cited the public’s need to know about the high-profile case as the reason for allowing a live broadcast of the hearing.