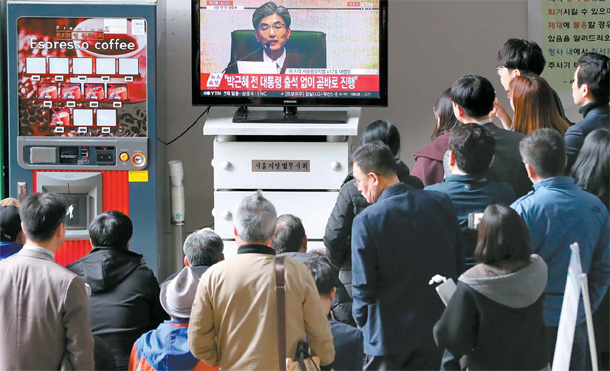 People watch Judge Kim Se-yoon of the Seoul Central District Court read the ruling on former President Park Geun-hye on a television in Seoul Station on Friday. The court found her guilty on 16 charges of corruption and power abuse and sentenced her to 24 years in prison and an 18 billion won (

"Park, in conspiring with Choi Seo-won, better known by her former name Choi Soon-sil, requested and received bribes worth over 23 billion won," said Judge Kim Se-yoon of the Seoul Central District Court. "When a culprit receives a bribe worth more than 100 million won, he or she can be sentenced to life or to more than 10 years. Her fines were calculated based on the laws she has violated.”

Of the 18 charges of corruption and power abuse the prosecution had levied against Park, who did not attend the sentencing, the court found her guilty of 16.

They include forcing conglomerates to contribute 77.4 billion won to two non-profit foundations Choi controlled; forcing Hyundai Motor Group to sign deals with Choi-controlled companies; forcing Lotte Group to pitch into Choi’s project to build a sports facility in return for a duty-free business license; forcing Posco to create a fencing team and have the Choi-controlled The Blue K take over its management; and forcing Samsung Group to fund some 1.6 billion won to a winter sports education center practically run by Choi as well as buy three horses for Choi, whose daughter Chung Yoo-ra is a dressage athlete.

"Park abused the power given to her by the people of the country and conspired with Choi to demand bribes from companies and meddle in their business decisions," Kim said. "She abused her power as the president and received 14 billion won worth of bribes from Samsung and Lotte, and requested 8.9 billion won from SK Group."

The court said Park received bribes worth 7.2 billion won from Samsung Group, though it cannot determine how much she kept for herself.

Park was also found guilty of abusing her power by blacklisting artists and cultural figures critical of her administration and exercising undue influence in the appointment of civil servants. She was found guilty of abusing her power as president to pressure former senior official of the Ministry of Culture, Sports and Tourism, Roh Tae-kang, to step down, after he pointed out problems concerning special treatment given to Choi’s daughter. The court judged Park had also pressured three officials in the ministry who did not cooperate on blacklisting artists to step down.

The court, however, found Park not guilty of two of the charges the prosecution levied against her.

Prosecutors accused Park of receiving bribes from Samsung Group in two cases, in return for supporting the group’s current de facto leader Lee Jae-yong cement control. The court said Park, as president of the country, "would not have had access to so much detail about the leadership and management of Samsung Group."

"When her crimes came into light one by one, it threw the country into confusion. Yet she has not showed much sign of remorse and kept blaming Choi and her aides,” Kim said. “She has to take heavy responsibility to make sure a president of the country does not abuse his or her power again."

Park's verdict, which lasted nearly two hours, was broadcast, the first time that a verdict in a criminal case has been aired live in Korea. Though she filed an injunction requesting that only a section of the hearing be broadcast, the court dismissed it. The court earlier cited the public’s need to know about the high-profile case as the reason for allowing a live broadcast of the hearing.

The heads of conglomerates involved in the scandal have also been jailed. Lee Jae-yong was released from prison in February after 353 days when an appeals court reduced a five-year prison term for bribery to a suspended sentence.

Shin Dong-bin, chairman of Lotte Group, stepped down as co-CEO of Lotte Holdings, a Japan-based holding company of the Korean conglomerate, in February after he was convicted of bribing Park to win a lucrative duty-free deal. He was sentenced to 2.5 years in prison.

Some of Park’s supporters rallied near the Seoul Central District Court Friday morning, holding signs that read "Park is not guilty" or "A trial that murders." Police said around 4,000 people gathered in the vicinity.

"What happened today is a sad thing for the country and for one person’s life,” Blue House spokesman Kim Eui-kyeom said in a statement. “We have to remember the past lest it repeats itself."