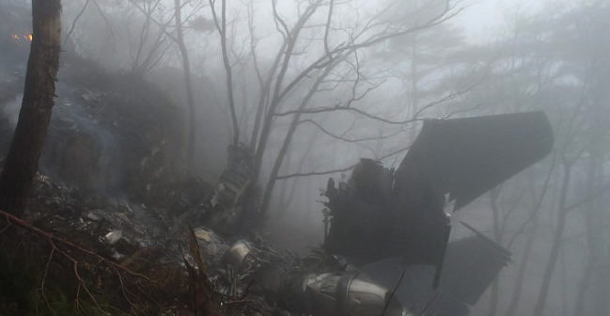 The wreckage of a Korean F-15K fighter jet that crashed into a mountain in North Gyeongsang on Thursday. [YONHAP]

The Korean Air Force said Friday it has retrieved the black box of an F-15K fighter jet that crashed into a mountain on Thursday. The flight data recorder is expected to help in finding out the exact cause of the incident that killed two pilots in their 20s.

The F-15K aircraft crashed into Mount Yuhak in Chilgok, North Gyeongsang, on Thursday afternoon on its way back to Daegu Air Base following aerial training.

The two pilots, identified as Captain Choi and First Lieutenant Park, apparently failed to eject from the plane. Debris from the plane and body parts were found at the site. “An X-ray analysis showed that the [collected] body parts match those of the two,” an Air Force official told reporters.

He pointed out that it’s still early to talk about the exact cause of the crash and added that there was “no problem with weather conditions” for the flight mission, although they were using “instrument flight” not visual flight.

The Air Force has decided to posthumously promote the two by one rank. It plans to hold a funeral for them at the Daegu base, home to the 11th Fighter Wing, on Saturday with the consent of the bereaved families.

The remains will be buried at the Daejeon National Cemetery in a ceremony to be attended by Defense Minister Song Young-moo, Air Force chief Gen. Lee Wang-keun and other dignitaries.