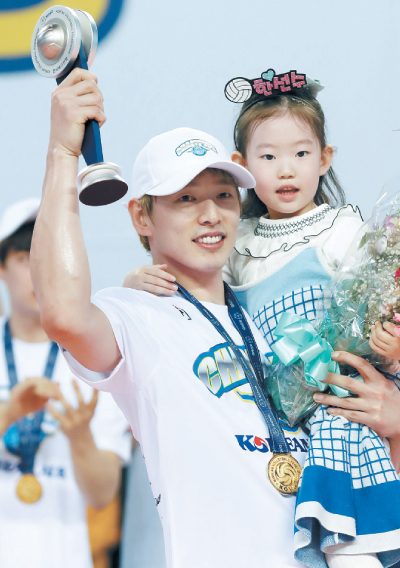 After just missing the Korean Volleyball Federation (KOVO) Championship title four times, Han Sun-soo, captain of the Incheon Korean Air Jumbos, was finally able to lead his team to victory and get his hands on the team’s first-ever Championship trophy on March 30.

By defeating the Cheonan Hyundai Capital Services Skywalkers 3-0 in the fourth game of the Championship tournament, the Jumbos won the club’s first Championship title. Previously, the Jumbos had advanced to the Championship finals four times - during the 2010-11, 2011-12, 2012-13 and 2016-17 seasons - but always finished runners-up. Each of those four seasons, Han had been with the Jumbos.

Of the four, the 2016-17 season was by far the biggest disappointment for the team, as the Jumbos were leading the best-of-seven series with two wins and one loss.

“Last season was a lot more disappointing than the 2010-11 season because we only needed to win one more game,” Han said. “I didn’t think we’d need 10 years to win the Championship. Last year, we were given a lot of pressure, but this season we didn’t feel as much pressure. When we lost the first game, we weren’t too disappointed. Since playoff games were difficult, we decided to play the Championship games more comfortably.”

When Han first joined the Jumbos in 2007, he was the team’s “third setter,” and wasn’t even at a level to play in practice games. But through practice and coaching, he slowly made his way up to be the team’s captain and the starting setter.

“When I was a rookie, the only thing I did was pick up balls [during practice],” Han said. “I learned a lot from the setter coach, and when our veteran players got injured, I was given an opportunity. I was lucky.”

In the beginning of the season, Jumbos head coach Park Ki-won said the team needed more time to connect, as they struggled to find the right timing between foreign player Mitja Gasparini’s attack and Han’s toss.

As the season went on, Han, who briefly gave away the starting spot to Hwang Seung-bin, finally met Park’s expectations, and Gasparini said, “Han Sun-soo’s toss is magical.”

“During the regular season, I felt bad for our players because our rhythm was completely broken,” Han said. “But we got to win because they hung in there.”

In the 2017-18 season, Gasparini was ranked fourth in the league in scoring, as he scored 863 points in 35 games in the regular season.

“Of the foreign players, Gasparini tried his hardest to blend in with the team,” Han said. “There are foreign players that ask for special treatment, but [Gasparini] trained with us and ate with us. There’s a very low chance of us having the first pick, but if we do, we want to bring back Gasparini.”

Han also became a free agent after winning the championship. Since the 2015-16 season, Han has been the highest-paid player in the league, making 500 million won ($467,650) a year.

Now that Han has finally achieved his goal of winning the KOVO championship, he has set another goal in the upcoming season.

“Next year, I want to win both the regular season and the championship,” Han said.