Kim Ji-hyun zooms ahead for first win of 2018

Kim Ji-hyun zooms ahead for first win of 2018 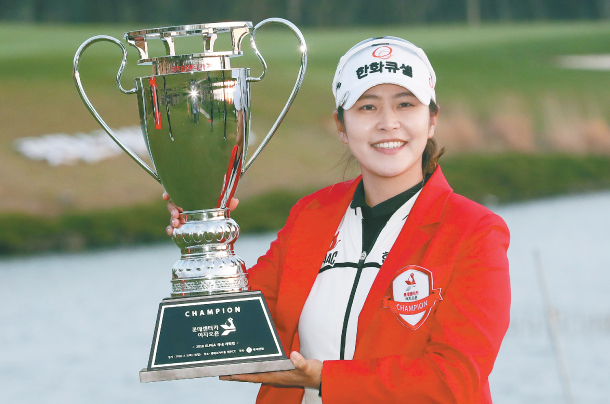 Kim Ji-hyun holds the tournament trophy after winning the Lotte Rent-a-Car Ladies Open at Sky Hill Jeju Country Club in Seogwipo, Jeju, on Sunday. With a bogey-free round of 68, Kim had her fourth career victory, finishing one shot ahead of runner-up Oh Ji-hyun. [YONHAP]

After two canceled rounds due to heavy winds and snowfall, Kim Ji-hyun won the KLPGA Tour’s first tournament in Korea this season, the Lotte Rent-a-Car Ladies Open at the Sky Hill Jeju Country Club in Seogwipo, Jeju, on Sunday.

Kim, who started the final round tied for fifth, shot a bogey-free round of 68 to finish one shot ahead of Oh Ji-hyun, runner-up.

Prior to the final round, Kim Su-ji led the field by one shot, with a round of 65 on Thursday.

Before the leading groups teed off, Oh - who shot seven under par, 65, in the final round - held the lead for quite a time at eight under par.

Kim finished her round with pars to finish the tournament at nine under par. Despite finishing runner-up, Oh had a great performance, moving up 29 spots on the final day, making nine birdies.

The KLPGA had to cancel the second and third round of the tournament due to inclement weather. On Friday, high winds prevented golfers from getting out to the course and on Saturday, the third round was canceled due to heavy snow in addition to wind.

Though she only played half of the rounds scheduled for the tournament, Kim still took home the full prize of 120 million won ($112,236), as only a minimum of 36 holes are needed to be played for a tournament to be official, according to the KLPGA.

The win is Kim’s fourth career victory, moving her up to the top five on the money list and in player of the year point standings.

Kim, who turned professional in 2009, had the best season of her career in 2017, winning three tournaments. Up until April 2017, Kim was a KLPGA Tour golfer who had never won a tournament throughout her career, but in June, Kim became the Tour’s second multi-winner of the season and a week later, she won another tournament.

Kim’s back-to-back victory made her the first player since Park Sung-hyun in the 2016 season to win back-to-back events on the KLPGA Tour. From her successful season, Kim finished second in the money list and sixth in the player of the year standings. Aside from the point standing, Kim had a successful season in her seasonal statistics, where she was ranked first in greens in regulation percentage (79.46), and sixth in average scoring (70.75).

Jang Ha-na, who won the Tour’s season opener in Vietnam, came up just short of winning her second tournament of the season by finishing tied for ninth at seven under par.

Prior to returning to Korea, Jang competed at the ANA Inspiration last week, the LPGA Tour’s first major tournament of the year, and finished tied for 30th.

Lee Jeong-eun, the defending champion who won Player of the Year and was the money leader last season, finished third at seven under par by making an eagle on the final hole.

Choi Hye-jin, a super rookie on the KLPGA Tour who won two tournaments as an amateur, finished tied for 16th at three under par. Kim Su-ji, the leader after the first round, ended up tied for fourth after hitting one over par in the final round.

After a week off, the KLPGA Tour will continue at the Nexen Saint Nine Masters 2018 at Gaya Country Club in Gimhae, South Gyeongsang, from April 20-22.