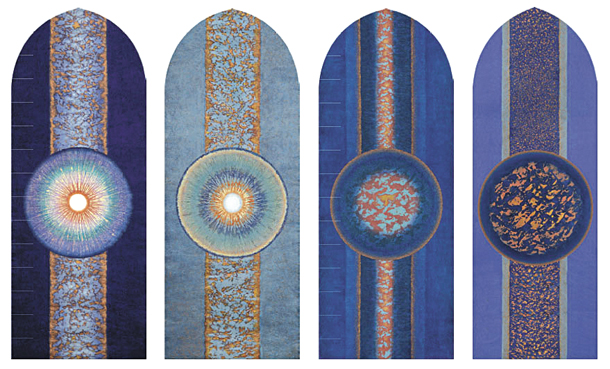 Above: Artist Bang Hai-ja’s works to be installed at Chartres Cathedral in France this year. Right: Bang works at her studio at Youngeun Museum in Gwangju on the outskirts of Seoul, where she is an artist-in-residence, on Friday. [BANG HAI-JA, YONHAP]

GWANGJU, Gyeonggi - In the twilight of her life, Korean artist Bang Hai-ja, who works and lives in France, is seeing her career blossom. Her paintings about life, love and peace through light were recently chosen to decorate the stained glass windows at Chartres Cathedral in France.

Looking at her paintings, which explore the source of light, and by extension, that of life in the brilliant hues of the cosmos, it was hard to believe such powerful, engrossing work came from the petite, soft-spoken, 80-year-old artist.

“While studying in Paris, I made a pilgrimage to the cathedral. While my feet hurt terribly, I remember I was so touched to peer through the bell tower to a barley field surrounding the cathedral,” Bang said during an interview on Friday at her studio at Youngeun Museum in Gwangju on the outskirts of Seoul, where she has been taking an art residency program.

For her artwork to be displayed inside the Unesco World Heritage site was an honor beyond description, she said, adding that the message she conveyed though the work seemed to have played a significant role in the decision.

Of the March 14 presentation at the cathedral, she said, “I explained that [each part of] the four-piece work represents light, life, love and peace.” This creates a virtuous cycle in which light is life, life is love and love is peace, she elaborated. 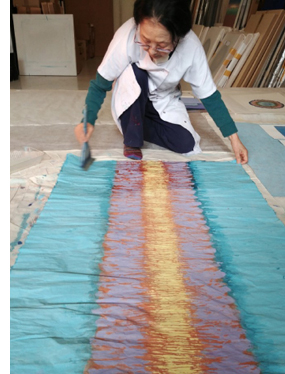 Born in 1937 in Seoul, she showed a talent for art from an early age. While she wanted to study French literature to become a poet, her high school teacher strongly encouraged her to study art instead, saying, “Painting is done not by the hand but by the heart. And you already have it in you.”

After graduating from Seoul National University, she managed to move to Paris in 1961 with the help of her open-minded, supportive parents, both of whom were art lovers and teachers. In 1963, she met respected art historian and critic Pierre Courthion, who became her biggest supporter until he died in 1988.

Though her life as a young artist had a smooth start in Paris, she called the first several years there the “hardest patches” of her life.

She suddenly had to support herself due to a difficult home situation. She couldn’t contact her parents as often as she wanted because a telephone was a luxury in war-ravaged Korea and it took two weeks to receive a reply to her letters. Only after getting married could she come back home to reunite with her parents. This was in January 1968.

In hindsight, she feels the subject of light came to her to be the center of her artistic world, not the other way around.

As a sick child, she spent most of her time sitting still, thinking and observing, rather than playing outside. One day she watched the sunlight glinting off the little stream near her grandparents’ house. Captivated, she wondered if she could paint it.

Her fascination with light continued as she grew. While in Paris, she had a surreal dream where the splendid light reflected on the ocean water she was painting suddenly came to life.

Now, her work to be displayed at Chartres Cathedral is a new chance to spread her belief that everything is connected and that there is no need to separate one thing from another, the octogenarian artist explained.

“A grain of rice is produced by the work of land, water, light, farmer and wind and so forth. The food, in turn, makes me. Everything and every person you meet in this world adds up to me,” she said.

“I want my art to help share this idea with others. When I pour my soul into my art, it will move and hopefully heal people.”