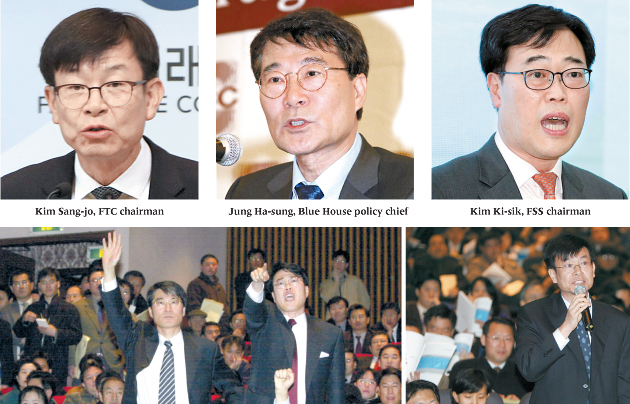 The country’s “chaebol snipers” have become the pillar of the Moon Jae-in administration’s economic team. Three of the president’s top appointees took aim at the sprawling family-run conglomerates while they were part of the same organization named People’s Solidarity for Participatory Democracy (PSPD) in the 1990s and 2000s.

The trio are Jang Ha-sung, a policy chief in the Moon government, Kim Sang-jo, chief of the Fair Trade Commission (FTC), and Kim Ki-sik, the newly-appointed head of the Financial Supervisory Service (FSS). They might have differing opinions on how to achieve economic development, but the three share one core belief- the power of Korea’s chaebol needs to be reduced.

That belief led them to join the PSPD in the late 1990s through the early 2000s, where they worked to strengthen the rights of minority shareholders.

Jang Ha-sung, who also serves as a business professor at Korea University, is best known as a proponent of shareholder activism and a critic of Korea’s chaebol-oriented economy. He increased the prominence of the local minority shareholder movement.

From his perspective, Korea’s capital markets are skewed toward members of chaebol families, who wield dynastic holds over corporate governance with a fraction of the total shares.

This is why the 65 year-old scholar, the oldest of the three, called on large corporate owners to respect the rights of shareholders and increase their dividends.

“The role of corporations is to make profits and distribute them,” Jang said in an interview. “One of the ways of distribution is dividends and wages. But in Korea, salaries are low and dividends that go to shareholders are far lower. Companies just stack up money.”

In his book “Capitalism in Korea,” he pointed to chaebol as the culprit behind the widening gap between the rich and poor and risks to the country’s economic system.

The solution is, he suggests, it to make economic policies that are designed to increase dividends.

Jang practiced what he preaches, and became a minority stakeholder in some of the country’s largest companies, including Samsung Electronics.

The policy chief earned the reputation as a chaebol sniper during a Samsung Electronics’ shareholder meeting in 1998.

Korean companies’ annual general meetings are generally little more than a formality and usually last less than an hour. But the regular gathering of Samsung Electronics’ shareholders in 1998 lasted more than 13 hours, the longest shareholder meeting in Korean history.

Jang turned up the pressure on the tech giant’s management for operating a paper company at the meeting.

Along with Jang, the People’s Solidarity for Participatory Democracy’s other members used a typical activist shareholder strategy, buying a small amount of shares - typically five to 10 - so they could attend the shareholder meeting and hold top management accountable for their wrongdoings.

Jang led the movement as the head of an economic reform committee at the nongovernmental organization between 1998 and 2003.

Their main target was Samsung Group, along with LG, SK and Hyundai Motor.

“Samsung Electronics needs to increase transparency,” he is quoted as saying in records provided by the organization.

The fight between the PSPD and Samsung got contentious in 1999, because Jang’s team at the organization found that Samsung SDS issued bonds to the chairman’s son at a lower market price so the value of other SDS bonds was diluted.

The warrant exercise price for the bonds was $5.50 and market value at the time of issuance was $42 on the black market, where unlisted shares were traded. It was a scheme to hand over capital to Samsung heir apparent Lee Jae-yong at around $116 million.

The PSPD filed an injunction to nullify the bond issue and won in a court decision.

The victory was symbolic, because it represented a rare case where small shareholders won against a corporate behemoth.

Pundits see the campaign as an impetus for shareholder activism.

“The minority shareholder movement helped change an institutional environment in Korea for shareholders and corporations,” Lee Sang-min, sociology professor at Hanyang University noted in his dissertation.

Six years later, in 2004, Samsung Electronics faced similar pressure from Kim Sang-jo, an international trade professor at Hansung University and the chief of the Fair Trade Commission. Kim had been leading a chaebol reform unit at PSPD since 1999.

He pressured Samsung to penalize executives who were accused of bribing politicians.

In the beginning of 2000, both Jang and Kim expressed skepticism that presenting their case at a once-a-year event was not enough to create meaningful change.

Kim then turned towards class action lawsuits, leading a movement in 2000 to make it easier for small investors to a file class action suit if a company incurs damages to them due to the owners’ wrongdoing.

The National Assembly passed the proposal in 2003, one of the civic organization’s major achievements. Like Jang, Kim said that creating a fair justice system for chaebol is essential to advance Korean capitalism.

Now the head of the country’s antitrust watchdog, Kim said he plans to use class action suits in broader ways.

“I plan to introduce a measure to allow consumers to easily file class action suits, especially when the damage is small but affect many consumers,” he said when he was nominated last year.

Besides consumer protection, the FTC head is working to improve opaque corporate governance, which is often combined with cross-shareholding among conglomerate affiliates.

The commission, for instance, ordered Samsung SDI to sell its remaining stake in Samsung C&T over the next six months, overturning its previous decision to allow Samsung SDI to only sell half of the stake it owned in a merger between Samsung C&T and Cheil Industries. Kim vowed to strengthen his scrutiny of chaebol.

“[The FTC] should work to improve the governance structure of conglomerates and prevent [them] from exploiting their economic influence,” said Kim in a New Year’s address.

“Through more scrupulous analysis and finding proof of allegations, we have to prevent [conglomerates] from inheriting management rights by manipulating the law and exclusively offering work to affiliates, which would damage the trade foundation with SMEs,” Kim said.

The PSPD’s academic leadership is linked to the socio-political conditions of the 1990s. Founded in 1994, the organization is considered to be left-leaning. They aim to enhance human rights and participatory democracy and create a more equitable distribution of wealth.

“The civic movement flourished in the 1990s after the democratization wave in 1988,” said Lew Seok-choon, a sociology professor at Yonsei University.

“They have agendas that are designed to contain dictatorial power, and the early members consisted of elites, such as professors and lawyers.”

The group’s initial members numbered around 200, but the membership has since then increased to over 14,000 people.

New kid on the block

The youngest member of the trio, Kim Ki-sik, often accompanies Jang when the professor-activist makes his annual pilgrimage to Samsun’s shareholder meeting. He is now the newest addition to Moon’s economic team.

He is a founding member of PSPD, working his way up to become sectary general of the group.

Kim, as a full-time member, worked on the minority shareholder movement from the late 1990s through the early 2000s.

Moon’s appointments to lead the regulatory agencies was unconventional, because high-ranking public officials typically take over the top posts.

Kim, who majored in anthropology at Seoul National University, is the first non-public official to head the FSS, while Kim Sang-jo is only the fifth professor to lead the antitrust body among his 18 predecessors.

Experts believe that the appointment is linked to the Moon government’s strong willingness to reign in the power of sprawling family-run conglomerates, because the main initiative of the Seoul-based civic group is to contain the influence of chaebol.

“Moon’s tapping of the heads - especially Kim for the nation’s financial watchdog - indicates that the government will intensify its efforts to regulate chaebol,” said Yun Chang-hyun, a finance professor at the University of Seoul.