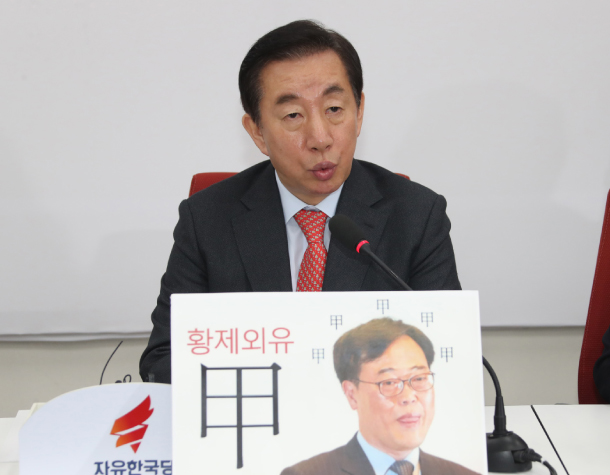 Kim Sung-tae, floor leader of the main opposition Liberty Korea Party, holds a press conference on Sunday to accuse Kim Ki-sik, the new head of the Financial Supervisory Service, of going on overseas trips multiple times with expenses paid for by financial institutions he was supposed to supervise as a lawmaker. [YONHAP]

Kim Ki-sik, the new head of the Financial Supervisory Service, is facing mounting demands for his resignation amidst snowballing allegations that he went on overseas trips multiple times with expenses paid for by financial institutions he was supposed to supervise as a lawmaker.

Kim, a former lawmaker and civic activist, is accused of taking a number of overseas trips with all expenses paid by financial and economic institutions such as Korea Exchange and Woori Bank from 2014 and 2015, when he was a lawmaker on the parliamentary national policy committee.

Calling Kim’s trips a “brazen conflict of interest,” the major opposition Liberty Korea Party has been lambasting Kim and demanding his resignation from the post that he assumed last Monday.

“The Blue House’s claim just a week ago that Kim was the right person to reform the financial sector now seems to be nothing but a case of a botched personnel appointment,” criticized Kim Sung-tae, the floor leader of the LKP during a press briefing on Sunday.

In mocking terms, he said Kim should have been sent to the Seoul Central District Prosecutors’ Office [for questioning on bribery], not the FSS.”

He called on prosecutors to investigate Kim for possible bribery. “Regardless of what excuses Kim will make, prosecutors must take on the case [for bribery].”

Accusations against the new FSS head center on three overseas trips he took as an opposition lawmaker between 2014 and 2015 during the Park Geun-hye government.

In March 2014, Kim went on a three-day trip to Uzbekistan sponsored by the Korea Exchange to review a proposal to help the nation set up a stock exchange.

In May 2015, he embarked on a four-day trip to Chongqing in China and Chennai in India with expenses paid for by Woori Bank. In Chongqing, he attended an opening ceremony for Woori’s regional branch.

The same month, Kim visited the United States and Europe on a 10-day trip sponsored by the state-funded Korea Institute for International Economic Policy (KIEP).

Kim was accompanied by his secretary and all expenses on the trip were covered by KIEP. The trip included stops to Washington, Brussels, Rome and Geneva.

Kim accepted the KIEP’s trip six months after he led efforts in his parliamentary committee to slash the annual budget for KIEP by 400 million won.

Responding to mounting pressure, the beleaguered chief issue a statement on Sunday apologizing for the trouble, but insisted the trips were “for the public cause” and did not impact his judgement.

“Though I embarked on overseas trips for the public cause, I apologize for falling short of people’s expectations and standards,” said Kim, adding these trips did not sway him in any way from fulfilling his duties as a lawmaker.

He said he would dutifully serve in his new role with “higher standards and principles,” making clear his determination to remain in his post.

Kim’s appointment to the FSS was seen by analysts as part of President Moon Jae-in’s attempt to reform the financial industry as the former lawmaker built his career as a strong critic of the finance world, which he said was too reliant on the chaebol and banks.

Along with Jang Ha-sung, the current policy chief at the Blue House, and Kim Sang-jo, chairman of the Fair Trade Commission, the trio are nicknamed “chaebol snipers,” or critics of Korea’s family-run conglomerates. Kim’s taking command of the FSS sent jitters through the financial industry.

A senior Blue House official said Sunday that dismissing Kim was not being considered.