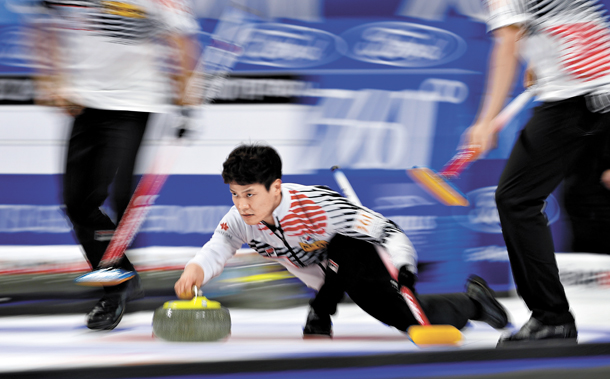 The Korean men’s curling team’s skip Kim Chang-min delivers a stone during a semifinals game against Sweden at the World Men’s Curling Championship at Orleans Arena, Nevada, on Saturday. [AP/YONHAP]

The men’s team made Korean men’s curling history on Sunday, finishing fourth at the 361 World Men’s Curling Championship 2018 after losing 11-4 to Scotland in the bronze medal game at the Orleans Arena in Nevada on Sunday.

Though the team failed to medal, they are the first Korean men’s team to ever reach the semifinals of the world championship. The women’s team have reached the semifinals twice - in 2012 and 2014 - but never advanced further.

Scotland started with the hammer, taking one point in the first end. Korea returned with two points in the second, securing an early lead. Scotland responded with force, scoring nine points over the next three ends to put the score at 10-2 by the end of the fifth.

After only managing to score two more points in the next three ends while Scotland picked up an additional one, Korea conceded in the eighth end with the final score at 11-4.

Prior to the game against Scotland, the 16th-ranked Korea lost to second-ranked Sweden 8-9 in two extra ends. Sweden, the silver medalists at the PyeongChang Olympics, were always going to put up a fight.

Korea came out strong in the game on Saturday, stealing points in the second and sixth ends to keep the match close. After tying the game at the last minute in the 10th end, the Korean team was in with a real shot of reaching the final. Unfortunately, Sweden managed to take a single point in the extra 11th end to win the game and send Korea to the bronze-medal playoff.

Korea finished fourth among 13 teams in the qualification round with a record of seven wins and five losses. The team got off to a great start with three wins, but fell into a rut, losing the next five games consecutively. A last-minute comeback saw Korea win the last four games to make it through to the qualification games.

The world championship is the first international tournament held after the PyeongChang Winter Olympics. While the top two teams from the preliminary rounds automatically advance to the semifinals, the third to sixth team has to play in a qualification round to earn their spot.

Korea defeated Norway 7-5 in the qualification game, becoming the first Korean’s men’s team ever to advance to the semifinals at the world championship.

The Korean men’s curling team, also called Team Kim after skip Kim Chang-min, competed at the PyeongChang Olympics but was overshadowed by the hugely popular women’s team. The men got off to a shaky start, losing their first four round robin games at the Olympics. Though the other Team Kim failed to advance to the semifinals, they finished the Games with their heads held high after ending their Olympics with four consecutive wins.

For athletes, two years of absence can make a huge difference. In curling, a precision sport, any period of time without practice can seriously impact an athlete’s ability to determine how much sweeping is required or how hard a stone needs to be slid.

“During my two years in the military, I couldn’t train for curling at all,” said Kim Chang-min during an interview with the JoongAnd Ilbo at the beginning of the year. “I just swept the floors. After I got discharged, I feel like I’m learning curling again.”

During his time in the military, Kim Min-chan visited the curling center to practice while on vacation.

The lesser-known Team Kim - skip Kim Chang-min, lead Lee Ki-bok, second Oh Eun-su, third Seong Se-hyeon and alternate Kim Min-chan - were reunited once the two Kims finished their military service. Lim Myung-sup, a former Korean curler, put aside his job as a banker and returned to the sheet to coach them.

Curling at full strength again after such a long break, Team Kim won the national team qualifier to represent the country for the first time in four years. Then, after winning the Asia Pacific Curling World Championship, they secured their spot at the world championship for the first time.

Playing with the exact same members as they did at the PyeongChang Olympics, Korea’s advancement to the semifinals allowed them to make quite a jump in the world rankings, moving up eight spots. Prior to the world championship, Korea was ranked 16th.

Sweden, who won the world championship by defeating Canada 7-3, moved up to the top spot in the world ranking. Canada is now ranked second.