After a historic weekend that saw three games canceled on Friday because of fine dust - the first time in league history - the KBO finally has a clear leader for the first time this season. 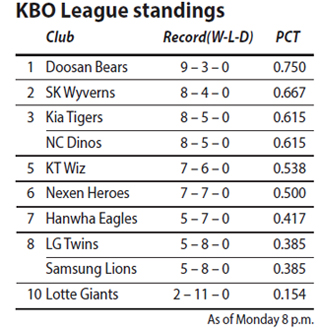 After a nearly five-hour-long game, the Doosan Bears took the lead in the KBO by defeating the NC Dinos 11-10 at Jamsil Baseball Stadium in southern Seoul on Sunday. With a hit at the bottom of the ninth, Doosan captain Oh Jae-won ended the four hour and 44 minute game 11-10 to take the Bears’ fourth consecutive win.

The two teams were tied going into the bottom of the eighth 6-6, but a three-run hit from Oh took the score to 9-6, seemingly winning the game for the Bears. The Dinos didn’t go down without a fight, scouring four at the top of the ninth to take the lead 9-10.

But the heavy rain was on the Bears’ side. Oh’s hit at the bottom of the ninth sailed past Kim Sung-wook, who struggled with the weather, scoring a run and defeating the visitors. The Bears now sit at the top of the KBO with nine wins and four losses.

While the Bears cemented their lead, the Lotte Giants also reinforced their position - at the bottom of the table. Another loss on Sunday gave the Giants their 11th loss, the first team to reach two digits this season. After losing their first weekend game to the LG Twins on Friday, the Giants picked up their second win of the season against the Twins on Saturday. However, the Giants weren’t able to continue their stride, as the series ended with another loss on Sunday.

During Sunday’s game, while the Twins were leading 2-0 going into the bottom of the seventh, Chae Tae-in hit a two-run home run to tie the game at 2-2. But the Giants’ fans’ excitement didn’t last long, as Yang Suk-hwan quickly brought two batters home, allowing the Twins to win 4-2. With another loss the Giants are now seven games behind the Bears and three behind the second-to-last teams, the Samsung Lions and the Twins.

At Incheon, the Lions had a big 12-4 victory against the SK Wyverns on Sunday. The Lions’ victory allowed Tim Adelman his first win in the KBO.


Though the Lotte Giants are playing at their worst, rookie Yoon Seong-bin is living up to expectations, picking up his first KBO win in his third game as a Giants’ starter.

During the Giants’ game against the Twins on Saturday, Yoon gave up two runs, three walks and six hits while striking out five in five innings. Yoon’s victory was also good news for the Giants, as the team picked up its second win of the season. 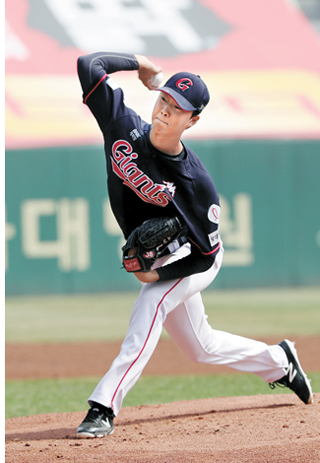 “There had been number of changes made in the lineup from what I was thinking at the beginning of the season, but we have great players on the team,” said Cho Won-woo, manager of the Giants. “Yoon Seong-bin stayed calm in a critical situation and pitched well.”

Yoon, who graduated from Busan High School, was the Giants’ first pick in the 2018 Rookie draft. Along with the other rookies this season, Yoon is considered a super rookie, signing at 450 million won ($418,500) with an annual income of 27 million won.

Though Yoon had to miss the entire 2017 season recovering from a shoulder injury, he still managed to lock his spot in the Giants’ pitching rotation, fifth, through the spring training camp.

Starting today, the Giants will play in three games against the Nexen Heroes in Ulsan.