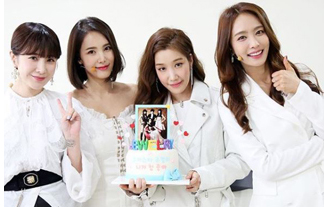 After a yearlong hiatus, singer Seo In-young, far left, appeared on the JTBC program, “To You Project - Searching for Sugar Man,” along with the other members of her disbanded group Jewelry on an episode that aired Sunday.

Seo was embroiled in a controversy in January 2017 after a video of her cursing at the production staff of the JTBC reality show “Late Marriage” while shooting in Dubai went viral. The person who leaked the video explained the situation, saying, “Seo lashed out at the main writer of ‘Late Marriage.’ When Crown J [another star on the show] tried to interfere, she got irritated with him. Seo canceled the shoot for the next day and flew back on her own.” Soon after the video spread online, Seo admitted to all her wrongdoings and dropped out of the program.

The JTBC show on Sunday featured the disbanded girl group Jewelry and Park Jung-ah, the leader of the group, explained that she convinced Seo that appearing on the show would be a good opportunity for her to apologize with the support of her old group mates beside her.

The episode showed an interview of Seo crying and expressing her regrets and apologies to everyone for her behavior in the past.

Meanwhile, the singer’s agency Star Empire said that her appearance on the program doesn’t mean that she will jump right back into the entertainment industry. They said that they are treading carefully when making decisions about the artist’s career.