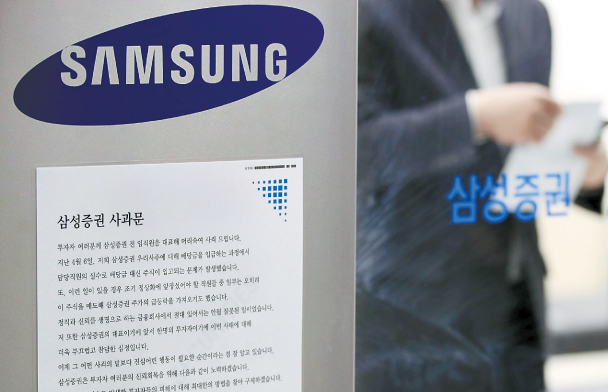 Samsung Securities posts an apology on the entrance of a branch office in Seoul on Monday. [YONHAP]

An error made by Samsung Securities last Friday has raised concerns of moral hazard in the securities industry after some employees of the brokerage tried to profit by selling “ghost stocks” distributed to them by mistake.

A trader at the brokerage firm was supposed to wire dividend payments to employees that owned shares of Samsung Securities: 1,000 won ($0.93) in dividends for each share owned. But the trader mistakenly typed “share” instead of “won” when making the transaction on Thursday, sending 1,000 shares to each employee. Despite the mistake, the transaction was approved, which sent a total of 2.8 billion shares of Samsung Securities worth 112.6 trillion won to the company’s employees at around 9:30 a.m. Friday.

According to the Financial Supervisory Service (FSS) on Monday, 16 employees of the securities company sold some 501 million shares, worth about 200 billion won at the time, to profit from the mistake between 9:35 a.m. and 10:05 a.m. Friday. Sale of these shares took place despite notification by the company not to sell the accidentally distributed shares at around 9:39 a.m. and another notification six minutes later. The watchdog called the incident the result of “moral hazard by employees” and “lack of an internal control system.”

The 2.8 billion shares - which market insiders call “ghost stocks” because they don’t really exist in the practical sense - are about 31 times the number of shares of Samsung Securities actually issued and traded in the market.

The incident is being referred to locally as a “fat-finger error,” caused by an individual who presses the wrong button on a keyboard when trying to process certain data. Though they are simple human mistakes, fat-finger errors can have a dire impact on the market. In 2013, a broker at Hanmag Securities made an error on option transactions that eventually forced the company into bankruptcy.

“The incident exposed a critical problem in a stock trading system such as non-existent shares being issued and sold [without any difficulties],” said Won Seung-yeon, senior deputy governor of the watchdog on Monday in a press briefing. “There was no internal system that could detect and shut down such an input error.”

Kim Ki-sik, the chief of the FSS, said the watchdog views the blunder as a company mistake instead of a glitch by an individual.

A number of petitions were lodged with the Blue House on Monday, calling the incident “illegal” and asking the government to conduct an industry-wide audit and punish the 16 employees that sold the stock. Some petitions even accused the employees of intentionally taking profit by processing the sale of shares as quickly as possible.

According to experts, the employees of Samsung Securities may face embezzlement charges.

“If [the authorities] confirm the employees sold the shares intentionally, it will be difficult for them to avoid embezzlement charges,” Bang Hyo-seok, a lawyer, told the JoongAng Ilbo.

Under current law, if someone charged with embezzlement has caused financial damage worth more than 5 billion won, he or she could be sentenced for five years to life in prison.

One of the employees reportedly sold shares worth 35 billion won, according to the company’s investigation.

“Right now, the focus of our investigation is whether the company has violated the Capital Market and Financial Investment Business Act,” said Kang Jun, a director general of the financial investment examination department at the FSS. “We will have to further investigate the case to decide whether embezzlement charges are applicable or not.”

Still, the incident revealed that it is possible for brokerages to make naked short-selling transactions by simple manipulation of their system.

“Something that shouldn’t have taken place happened and exposed a number of issues,” said Kim Dong-yeon, the country’s finance minister, in an interview with a local radio station on Monday.

Korea’s economic chief said the incident was “effectively similar to naked short-selling” and that the authorities will investigate.