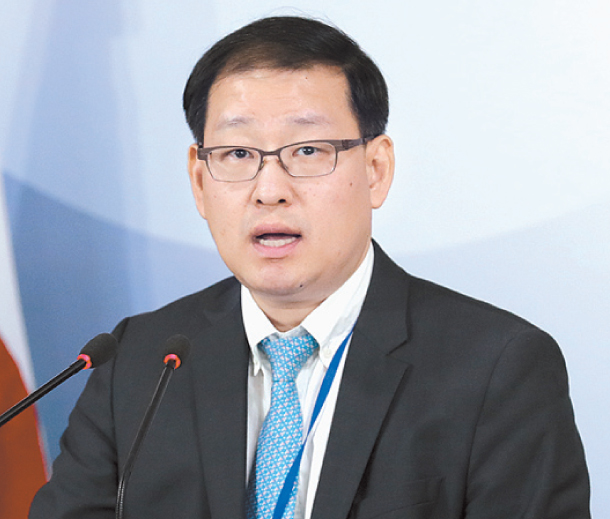 For the last few years, the Korean sales records of big foreign companies like Apple, Louis Vuitton and Google have been a mystery. The Financial Services Commission wants to change that.

In 2011, the last year Louis Vuitton Korea disclosed its audit report to the public, it generated 497.3 billion won ($462.5 million) in sales and 57.4 billion won in operating profits.

It paid 47.8 billion won in rent to department stores and 14.3 billion won in corporate tax. Since then, Korea has learned nothing about how the luxury retailer has been doing here.

In November 2012, Louis Vuitton Korea transitioned from a listed company to a private limited company, removing its obligation for an external audit.

Apple Korea tells a similar story. In 2009, the company unveiled its audit report for the last time. Between October 2008 and September 2009, Apple Korea raised 178.2 billion won in sales and made an operating profit of 5.7 billion won. Sales of iPhones started in November 2009, but nobody outside the company knows its sales or how much money it made. Just before the iPhone’s grand release, Apple Korea transformed into a private limited company from a listed one.

These company’s situations will change in 2020, as private limited corporations will be subject to external audits, an obligation which in the past was only imposed on companies listed on the stock market.

On Sunday, the FSC announced details on its revised standards for the companies that will now be required to undergo audits. The purpose of the FSC’s changes is to enhance transparency across companies in Korea by addressing audits’ blind spots. 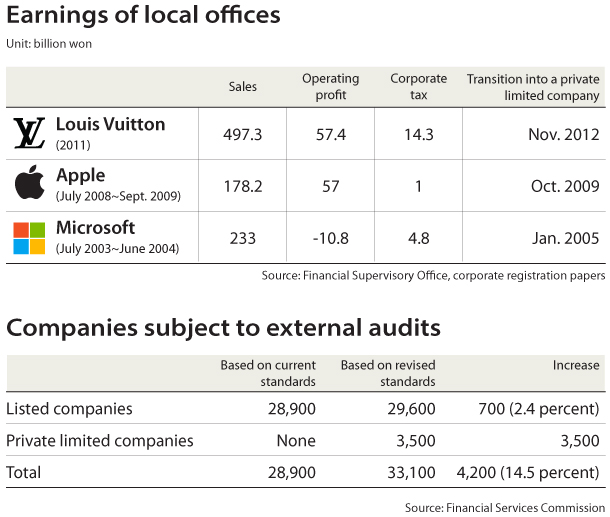 The revised standards will include the Korean offices of foreign companies like Louis Vuitton, Apple, Google and Facebook. The changes for limited private corporations will be applied starting from November 2019, meaning those who release their yearly fiscal reports in late December will have to conduct audits starting from 2020.

The companies will have to receive external audits and submit an audit report to the Financial Supervisory Service. The information will then be shared on the FSS website.

“Private limited corporations will be faced with the same standards as listed companies,” said Park Jung-hoon, director general at the FSC’s capital markets bureau. “We’ve counted around 3,500 private limited companies that will be obliged to receive external audits.”

However, there are limits. Only the finances of local corporations will be subject to the audit. In other words, it will be impossible to know how much a foreign office of a global company generated in the Korea market.

It also remains to be seen if foreign companies in Korea will go along with the reforms and transparently share their financial information, as some speculate that they will find ways to get around the Korean law.

One way of avoiding the audit could be recording sales made in Korea in the books of foreign offices.

For example, Google is estimated to rake in more than one trillion won per year in Korea. But Google Korea’s sales reported to the tax office do not reach that amount. Many of Google’s sales generated in Korea are measured as sales of foreign offices because the company’s servers are located outside the country. Consequently, the amount of corporate tax that Google Korea pays to the local government isn’t very much.

Apple’s sales in Korea are estimated at over 3 trillion won, but the exact figures are unknown. While local sales of the company’s iPhone, for example, can be calculated, the company could report a higher cost when importing the product from overseas.

In this case, profits generated in the local market can transform into the profit of a different foreign subsidiary, reducing the amount of corporate taxes paid to the Korean government.

Daewoo Shipbuilding & Marine Engineering’s accounting fraud in 2015 was the motivation for increased punishments.

If it is punished based on the new laws, the company may be slapped with a fine worth 300 billion won, calculated by its over-reporting of profits by 5 trillion won.

The same fine will apply to foreign companies in Korea.

FSC will also change the deadline for companies to submit their financial statements to auditors in a way that would prevent shareholders’ meetings from clustering in late March, which makes it hard for shareholders of multiple companies to attend them all.

The auditor’s deadline to submit audit reports will also be adjusted to give them more time to review the statements.