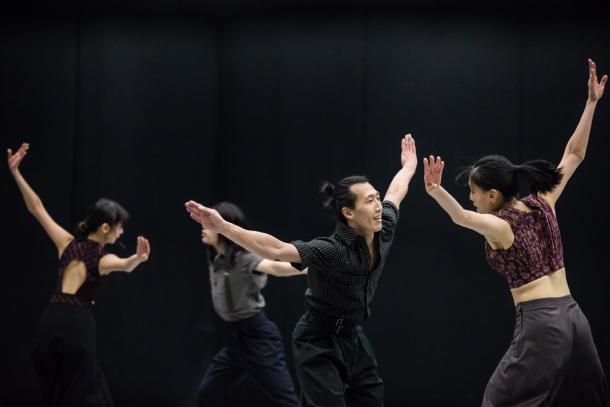 With its quick twists and graceful jumps, swing dancing is known to be just as exciting to watch as it is to perform. In the upcoming production of “Swing,” the dancers of the Korea National Contemporary Dance Company present a modern take on the American dance form by collaborating with the Swedish swing jazz band Gentlemen & Gangsters. Directed by choreographer Ahn Sung-soo, whose innovative moves illustrate a unique chemistry with the live musicians, this performance promises to provide a fresh take on swing dancing to audiences.

The show, which runs for three days from April 20 at the Seoul Arts Center in southern Seoul, differs from conventional swing dancing, especially in terms of its choreographic movements. The rapid, pointed movements of the dancer’s feet are evidence of the choreography’s tap dance influences.

After finishing their parts, the dancers remain on stage, sitting on benches. Instead of immediately exiting the stage, the resting dancers wait for their turn while watching the performances of the others.

By blending elements of Hawaiian dance and working with Western music, Ahn presents a different style from his previous works.

This is the first time for Ahn, who has always used traditional Korean music, to use Western music in his works.

“[The director] thinks it is important to show the world how well Korean dancers can dance to Western music,” said Im Young-sook, a PR staff from the company.

“I was mainly motivated by the 1993 film ‘Swing Kids,’ in which the German soldiers are swing dancing to the vibrant music,” said Ahn. “Additionally I simplified the swing dance on purpose due to the lack of time. Conventional swing dancing takes a long time to practice, and I reinterpreted it in an easier, modern way for the audience to enjoy.”