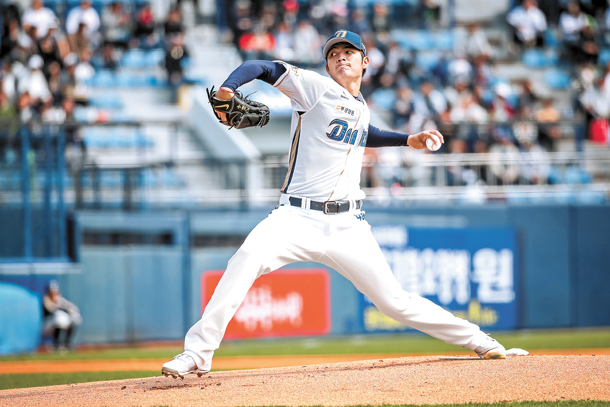 The NC Dinos’ latest foreign pitcher, Wang Wei-chung, is the first Taiwanese player to join the Korea Baseball Organization (KBO), and he’s been doing his country proud so far this season. 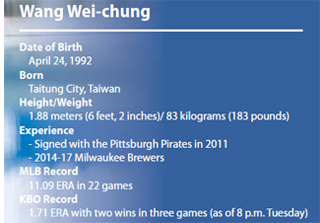 Taiwan hadn’t been considered prime territory for Korea Baseball Organization scouts looking for foreign players, as the Taiwanese league is considered a level lower than the KBO. Occasionally Taiwanese players were considered, but no Korean team ever signed one. Wang is breaking new ground with his strong start to the season.

“We were looking for a new and young player,” said Yoo Young-joon, the general manager of the Dinos. “And we’ve been consistently looking at Wang Wei-chung. We have high expectations for the strong left-handed pitcher.”

Wang’s season is going great so far, as his ERA is a low 1.71 and he has won two of three games as of Monday. Wang’s fastball has reached up to 150 kilometers (93 miles) an hour and his slider 137 kilometers per hour.

“I’ve been having interviews every day for two weeks since the opening day,” Wang said. “This is the first time in my baseball career to receive this much attention. I did receive some attention when I left for the United States, but that was only for a short period of time.”

At age 19, Wang signed with the Pittsburgh Pirates in the United States. However, he wasn’t able to compete in the major leagues while playing for the Pirates, instead playing in the minor leagues after an elbow surgery in 2012.

He joined the Milwaukee Brewers in 2014, and had an unsuccessful career after his big league debut with the team. In 22 major league games, Wang played for 19 innings and racked up an 11.09 ERA. In the minor leagues, Wang had an ERA of 3.25 and played in 116 games.

After Wang decided to leave the United States, as he realized it would be difficult to continue his career there, the Dinos got in contact with him.

Since Wang was one of the many players that left Taiwan to play overseas, he was almost unknown among Taiwanese baseball fans. But this year, as he became the KBO’s first ever Taiwanese player, his popularity back home has shot up.

It’s not just Wang benefitting from his successful KBO debut.

Fans in Taiwan can now watch the Dinos’ and other KBO games after the KBO sold its broadcasting rights to another country for the first time.

“Rather than selling [the broadcasting rights of] only Wang’s games, we decided to sell all 144 games,” said Ryu Dae-hwan, the president of Korea Baseball Organization Properties (KBOP). “We are negotiating with the Taiwanese broadcasting company, but it is likely that the games will be broadcasted more on portal sites.”

However, the broadcasting rights aren’t sold for a high cost, as the KBOP is focused on popularizing the KBO.

Travel businesses are also benefitting from Wang’s successful debut, as Taiwanese fans are making trips to Korea to watch Wang’s games. For the Dinos’ home opener against the LG Twins on March 24, which Wang started in, fans and reporters from seven different media outlets in Taiwan travelled to Korea.

When Ichiro Suzuki signed with the Seattle Mariners in 2001, more Japanese tourists visited Seattle to watch his games. Korea is experiencing the same phenomenon. To meet the high expectations, Wang says he has been working even harder.

“On game days, he gets to the stadium at 1 p.m. and has eight different exercise routines,” said Wang’s translator.