Korean basketball teams are scrambling to meet new height requirements before next season starts, with some already kicking out players for being too tall. 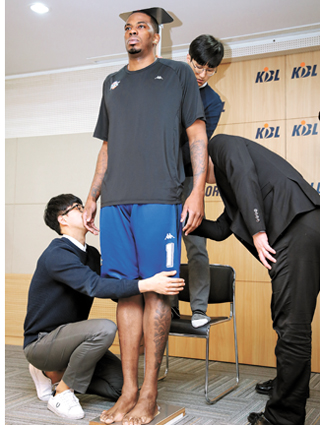 Charles Rhodes of the Jeonju KCC Egis has his height measured at the Korean Basketball League’s headquarters in Seoul on Friday. [YONHAP]

Starting in the 2018-19 season, each team’s two foreign players cannot exceed 2 meters (6 feet and 6.7 inches) and 1.86 meters, respectively. The Korean Basketball League said it changed the rules because foreign players tend to dominate the center position. The league believes placing height limits on foreign players could give more opportunities for Koreans to play the sport.

“The average score per game goes up with shorter foreign players because they tend to play faster,” said a source close to the Korean Basketball League. “This was done to prevent boring basketball, where a tall foreign center targets the inside. [The change] will bring more fans.”

It has been 10 years since the Korean Basketball League last changed the height requirements for foreign players. The current rule dictates a maximum height of 2.08 meters for each player, and the sum cannot exceed 4 meters.

Kim Young-ki, the league commissioner, was strongly in favor of setting a height limit for foreign players because more fans attended games when shorter players dominated the league. Not only is the change expected to speed up the pace of play, it will also allow more Korean players to take the center position.

However, the teams have not been as keen on the new height limits. Son Dae-bum, a basketball commentator for KBSN Sports, sarcastically quipped that scouts would have to carry around a tape measure while looking for foreign players. “At the NBA, there are plenty of 3-point shooters and guards that are over 2 meters tall,” he said. “High-scoring games don’t always mean fun basketball.”

David Simon of the Anyang KGC was forced to leave the league because his height exceeds 2 meters. Simon is the league’s dominant foreign player, ranking first in scoring average at 25.6 points per game.

On April 2, he visited the Korean Basketball League’s headquarters to measure his height. Staff members had to hold his gut and knees to make sure measurements were accurate. When the first measurement exceeded 2 meters, Simon ran around the building, following a tall tale that jogging can slightly affect a person’s height.

But the second measurement came out to 2.021 meters. By 2.1 centimeters, Simon was forced to leave the Korean Basketball League, in which he had played for five seasons since 2010.

“Personally, I don’t really understand it,” Simon said during an interview with BBC. “Just from the fact that there are only two or three of us that were even over the limit, and then two of us are right there. The tallest guy, Rod Benson, he was well over the limit, but besides that, most of the guys there aren’t super small, or there isn’t that much difference in their skills.”

Players have been taking active steps to make themselves even slightly shorter. Charles Rhodes of the Jeonju KCC Egis was 2.01 meters tall the first time the Korean Basketball League measured him. After lifting weights and doing other exercises, he was able to get his height down by 0.9 centimeters to barely pass the height limit. Rhodes, who has played in the league since 2010, is ranked second in career block shots at 561 and 10th in career rebounds at 2,838.

While the height limit applies to foreign players, Korean players have no rules, even though the tallest Korean player, Ha Seung-jin of the Jeonju KCC Egis, stands at 2.21 meters. Ha does not have to worry about his height because he is a domestic player.

There are also concerns that Korea’s international competitiveness will drop with the new height limit. For the FIBA Basketball World Cup 2019, Korea is scheduled to compete with China and New Zealand, which have several players that are above 2 meters. Fans are worried that the new rule will dull the skills of the national team and reduce its chances of making it far in the international scene.