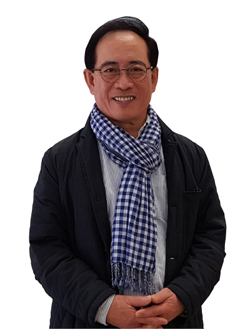 Chun Kwang Young, 74, is known as a world famous hanji artist for his work with traditional Korean mulberry paper. But his works, which are now on view at his solo show at PKM Gallery in central Seoul, don’t appear to be made of hanji, which is often associated with warmness and aesthetics of white color, at a quick glance.

In Chun’s “Aggregation” series, numerous triangular pieces, large and small, are put together to form ruggedness and cracks such as those found on the surface of the earth.

At a closer look, each of the triangular pieces is wrapped in hanji torn from old Korean books. Accordingly, each of the works seem like landscapes of the earth’s surface formed by traces of human history rather than by nature.

It is well known that each of the elements that make up his works are inspired by Korean traditional medicine packages made out of hanji, which the artist saw many times during his childhood.

“I would go to the neighborhood oriental medicine clinic operated by my granduncle,” he said in an interview with the Korea JoongAng Daily. “From the ceiling of the clinic were hanging many hanji bags labeled with the names of medicinal ingredients. And the doctor - my granduncle - would wrap the medicine he made for a patient in hanji and write the prescription on it.” 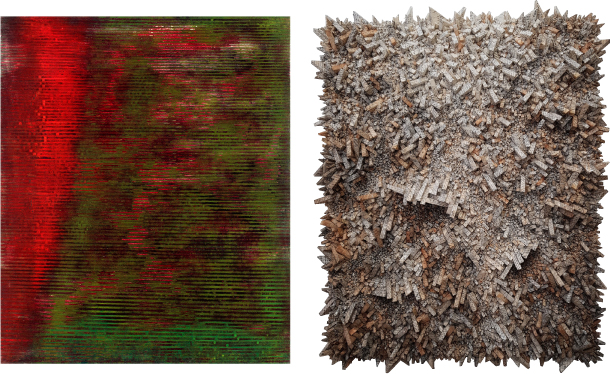 Although this memory brings about some warmth and nostalgia, each complete work in the “Aggregation” series gives a rather harsh feeling, with each element’s angular planes protruding in different directions and with visible gaps throughout each piece.

When asked about this, the artist said, “This is because the works are scarred human inner landscapes.” He added, “Even this tiny peninsula is divided into the North and South. And even within the South, people fight each other because of ideological splits and other reasons.”

The artist also said these structural units wrapped in hanji sheets from old books sometimes represent individuals, and other times communities or ideologies. “I want to express how these units can both create harmony and conflict by attaching them to one another,” he said.

Chun’s works, in particular those of earth tones or dark tones hanging in the first room of PKM’s main building, look barren and harsh. However, the texture of the hanji that covers each of the triangle units has a tinge of softness and warmth, complicating the works. 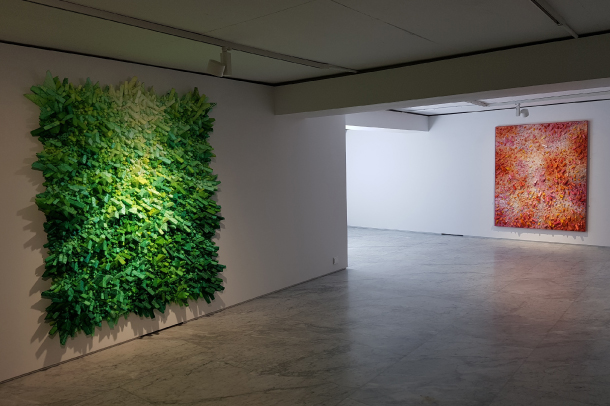 In addition, the artist began to apply bright, rich colors to his “Aggregation” series in recent years, adding emotion and lyricism to his harsh “inner earth landscapes.”

These kinds of “Aggregation” series have subtitles like “Dream” and “Desire.” Those works are on display on the second room of PKM’s main building and the basement room of the gallery’s annex building.

“I developed my sense of color while working at a fabric dyeing factory to earn my tuition [in the late 1960s] in the United States and doing my early works [which were] abstract expressionist paintings,” he said. The exhibition also features abstract paintings created in his early days on the first floor of the annex building.

“But the colors I use now are obtained through traditional Korean natural dyeing techniques,” the artist said. “It is part of my long effort to establish my identity as an East Asian and a Korean artist.”

Chun is scheduled to hold a solo exhibition at the Brooklyn Museum in New York this autumn.

The exhibition at PKM Gallery runs through June 5. The gallery is located near the Blue House. For details, visit www.pkmgallery.com.