A death sentence to all

A death sentence to all 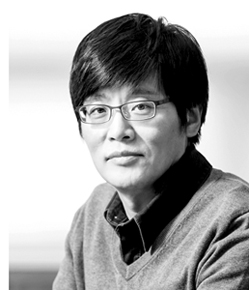 
The Sewol ferry is sinking again, and this time, it is a bigger ship.

The sea is the fine dust engulfing the citizens of Korea. People are hearing the same direction that students on the Sewol ferry heard four years ago. “Stay put and stay inside.” People are being advised to avoid outdoor activity and wear a mask when going out.

Just like four years ago, things are hectic, but rescue is not underway. “Wash yourself when you return home,” they say. “Drink water, and eat fruits and vegetables with vitamin C. Maintain indoor air quality with ventilation and cleaning. Refrain from activity that causes air pollution, such as burning waste.” The government does not specify what it is doing but recommends what people should and shouldn’t do.

President Moon Jae-in promised “clear skies and clean air” during his election campaign. His plans on fine dust got the most “likes” on his campaign website. However, his measures after 10 months in office sound helpless. Emergency measures such as sprinkling water on roads, reducing vehicle use by public workers and cutting down operations at businesses that generate air pollution are to be expanded. The number of people venting online that they want to move abroad because of fine dust has grown tenfold in the past two years. We’ve heard these cries before. “Is this a country?” they ask.

The plan is not a solution. Getting accustomed to fine dust is meaningless. It would be better to distribute gas masks to all citizens. Perhaps developing a revolutionary fashion item will help protect citizens’ health. We are wasting time without making sufficient efforts against the urgent danger. If such slack preparation continues, it will become a death sentence for all citizens. The execution: weak health and lack of self-help. 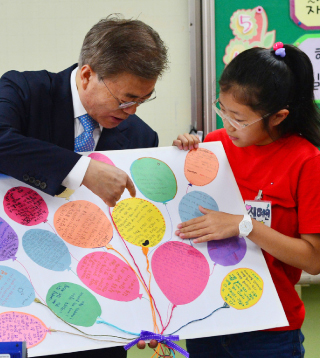 President Moon Jae-in listens to students’ wishes for clean air at an elementary school in Seoul shortly after taking office last May. During his campaign, he pledged to rid Korea of fine dust pollution. [JOINT PRESS CORPS]

Why hesitate when it is a national disaster? What’s more important than North Korea’s nuclear threats and constitutional reform is the fine dust that is murdering people today. I don’t understand why the Blue House directly addresses online petitions that are jokes and have ministers, who are really just sidekicks, oversee such an urgent issue. The Blue House needs to seek fundamental solutions.

Just like in European countries, production of diesel cars needs to be phased out. More than half of the particulate matter related to traffic comes from construction equipment and distribution vehicles, and they need to be replaced with electric and hydrogen cars first. Korea is leading in hydrogen and electric car technology, and they need to be nurtured and commercialized.

Thermal power generation needs to be eliminated. They should be replaced with cleaner forms of energy, such as nuclear and renewable energy. Pollutants need to be accurately analyzed, and pollution measurement and control networks should be formed.

Another important factor is particulate matter from China. We need to present them with evidence that residue from firecrackers used during Chinese holidays were detected in Korea and demand China rectify this. If necessary, large-scale ionized water sprinklers should be installed on the west coast to reduce fine dust. This is not a far-fetched idea. If the technology can be commercialized, Korea can lead the global environmental market in the future.

Of course, it is not easy. But we cannot be idle. Philip Noel-Baker, who won Nobel Peace Prize in 1959 for his contribution to arms reduction, said, “Defeatism about the past is a grievous error; defeatism about the future is a crime.” Speaking without action is defeatism. How can defeatism help keep a promise to reduce particulate matter by 30 percent by 2022? It is a crime. Until then, the Sewol ferry that is the Korean Peninsula will continue sinking in air pollution.