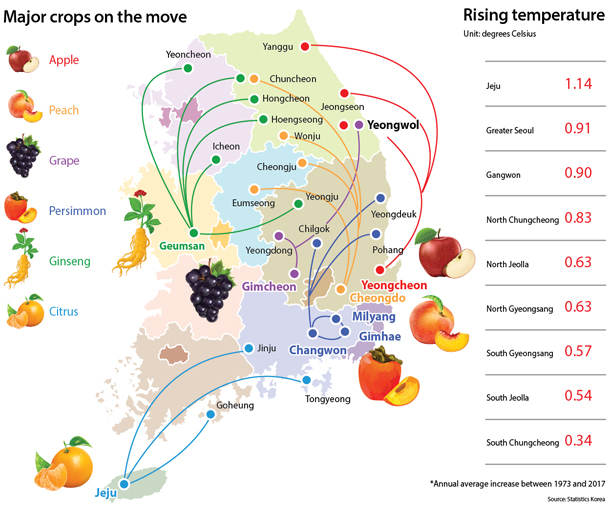 Daegu was once famous across Korea for its apples. But today, shoppers would be hard-pressed to find a Daegu-grown apple for sale, as rising temperatures have pushed farms to the cool northern mountains of Gangwon.

A study by Statistics Korea released on Tuesday shows that global warming is changing the landscape of Korean agriculture, as many crops that used to be farmed in southern regions have moved north. Fruits like apples are even being harvested in Gangwon, which used to be considered too cold for fruits and was known instead for its potato harvest.

According to the statistics agency, between 1973 and 2017 the country’s average temperature has been rising by 0.67 degrees Celsius (1.2 degrees Fahrenheit) annually.

Jeju had the sharpest average annual temperature increase at 1.14 degrees. The greater Seoul area saw an average increase of 0.91 degrees.

Statistics Korea said that if the increases continue at their current pace, by the end of the 21st century most of Korea, except for Gangwon, will be basking in tropical heat.

Apples once farmed in North and South Gyeongsang are now grown in Gangwon, and Statistics Korea projects that by 2090 only a few areas in Gangwon will be able to grow the fruits.

The situation isn’t much different for grapes. They used to be raised in farms in South Gyeongsang, including Gimhae, Milyang, Yangsan and Changwon. But the number of farms raising grapes in the area is shrinking rapidly, while grape farming in Gangwon regions such as Yeongwol, Samcheok and Yanggu has been expanding rapidly.

Grape farms have also moved up to northern parts of Gyeonggi, such as Gapyeong, Hwaseong, Pocheon, Yeongwol and other cities and counties.

Peaches, which were once grown in Gyeonggi and South Chungcheong, have moved to Gangwon and North Chungcheong. The statistics agency noted that Korea’s production of grapes and peaches would see a significant drop after 2050.

Citrus fruits, once only raised on Jeju, are now being grown in southern parts of the mainland. Some farmers are growing citrus as far north as Icheon, Gyeonggi and Cheonan in South Chungcheong.

Ginseng, one of Korea’s biggest agricultural exports, has long been grown in North and South Chungcheong in Geumsan and Eumseong counties. Since 1995, ginseng production has shifted shifting towards Gangwon, including Hoengseong County, famous for its beef, and Wonju, a potato-growing town.

“The farmland that used to grow popular fruits such as apples, peaches and grapes are shrinking,” said Kim Jin, an official at Statistics Korea. “Instead, fruits that are appropriate for tropical temperatures, such as citrus and persimmons, are expected to see an increase in production.”