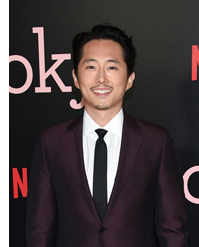 Yeun visited Korea a year ago to promote the Netflix film “Okja,” which he starred in.

His role in “Burning” has him playing a character completely different from his previous roles on movies and television.

The actor is most famous for his role in the American TV series “The Walking Dead.”