Young men from a newly launched tour service, Oh My Oppa, takes tourists around Seoul to show around hip areas that are not widely known among tourists. The agency targets foreign fans of Korean popular culture, who not only hope to befriend a local but also possibly encounter someone like their favorite TV and music stars. [OH MY OPPA, JIN MIN-JI]

Hoping to fulfill their fantasies of meeting a man that resembles the heartthrobs that often appear in hit Korean dramas or are members of K-pop boy groups, many young women around the world have booked themselves a ticket to Korea.

Looking to tap into the desires of a large group of foreign tourists, a tour guide service called Oh My Oppa launched this month offering “a Korean Oppa as your travel friend while traveling in Korea.” Its goal is to cater to passionate fans of Korea’s cultural exports, who not only harbor a hope to experience what they have seen on Korean dramas, but also have a need for a tour guide who can take them around Seoul.

The term oppa is a Korean word that means older brother that women use to address older male family members, friends or romantic partners. Often used as a term of endearment, many female fans of Korean actors or singers from around the world refer to their favorite stars as oppa. 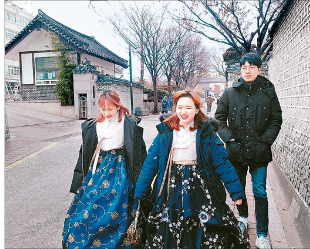 Ryan oppa shows Taiwanese tourists around Samcheong-dong, central Seoul, after they rent out hanbok, or traditional Korean clothing.[OH MY OPPA]

Although the oppa that tourists meet up with may not appear on popular television dramas or be a powerful stage performer, they do share good looks and a warm personality.

This special tour service, which officially launched in April after running a successful pilot service for about a month in December, targets foreign visitors hoping to meet an oppa like the ones they have seen on TV or in music videos.

“To Koreans, the term oppa conjures up many kinds of images [from a close friend to a family member]. But foreigners often associate the term with either K-drama stars or K-pop singers - someone nice and good-looking,” said Hur Jeong-mun, CEO of Oh My Oppa.

“The tour program originally started out as a small project of a now-closed application service named Meet Eat Chat, which provided a way for tourists to connect with local tour guides. But the project was so well-received, that it has been expanded to become its own separate business,” said Hur.

Hur agreed that many foreign tourists visit Seoul with hopes of finding a good-looking love interest, like those they often see in Korean dramas, only to be disappointed by the gap between their expectations and reality.

The role of this service is to narrow that gap by providing a fun experience for visitors, and it even caught the attention of foreign media like Cosmopolitan Philippines before it launched.

Although Korean dramas and music are particularly popular in Southeast Asia, the company’s customers hail from a wide range of countries, including France and the United States, not to mention Hong Kong, Indonesia and Malaysia.

“I think our service has gained global attention because many tourists to Korea are often from Southeast Asia, and they usually travel alone or come in groups of female friends instead of with a boyfriend.”

Every oppa is selected based on strict standards that includes friendliness and their appearance, and each of them offers a different type of tours in a different language, so tourists can choose who best matches their interest. Some of the places listed as stops on a tour include a raccoon cafe in Hongdae, western Seoul, an underground shopping center in Gangnam, southern Seoul, and Samcheong-dong in central Seoul, where tourists can try out wearing hanbok, or traditional Korean clothing.

There are currently seven oppas to choose from, and they can speak either English, Chinese or Japanese. The company is planning to hire at least three more who are able to speak different languages.

The goal of the service is to take tourists to places that are frequently visited by locals instead of tourist-heavy areas that even travelers have grown weary of due to the crowds.

With the arrival of spring and blooming cherry blossoms around Seoul, the oppas are currently providing special cherry blossom tours, giving tourists a chance to enjoy the beautiful scenery with a local in the know.

“I was surprised after hearing about the existence of this kind of tour service,” said 30-year-old American software developer and engineer Eeshan Kabir, a day before she met her oppa, Arami, for a cherry blossom tour a few days after the company officially launched its tour service.

After meeting and sharing an awkward greeting at Yeouido station in western Seoul, Kabir and Arami headed straight to a nearby dumpling restaurant to enjoy a local snack.

As someone who studied Korean at university and used to date a Korean man, the Korean dish was no surprise for Kabir. But sharing her story and listening to the life of a local was a fun way for her to make a new connection while in Korea.

After finishing the meal, the two headed out to enjoy the beautiful cherry blossoms in Yeouido Park. They walked through the park, snapping photos and taking selfies together, just like the many couples who surrounded them.

“It’s true that the tour gives the tourist the impression that she’s on a date,” said Arami, who also works as a live broadcaster for a mobile app, posting his daily routine to followers that are mostly from Southeast Asia.

When asked whether there are regulations that the oppa has to follow during the time spent together with the tourist, Arami said specific rules have yet to be established.

What about the possibility of a relationship developing between the two?

“I guess that could be possible.”

Although Arami did not have professional knowledge of the places he was visiting with Kabir, he was prepared enough to provide brief and simple explanations to her when she asked about the history of the park. For example, while Kabir boasted her knowledge of Korean culture, she was surprised to find out from Arami that Yeouido Park was a plane runway during the Japanese colonial period (1910-45). The two posed for a photo in front of a sculpture of an airplane that stands in the park.

Although Arami’s English isn’t “native,” according to him, the two had no problem communicating, as Kabir’s Korean was fluent enough for them to communicate in Korean.

Each oppa from the service guides tourists in different languages, but not all of them are native speakers.

“Some speak the [foreign language] fluently while others are not as fluent,” said Hur. “They are regular people instead of specialized tour guides, so [not all of them] have a perfect command of the language, although their language skills are good enough to communicate.”

Walking across Yeouido Park and all the way down to Yeouido Han River Park at Yeouinaru station without engaging in any special activities other than looking at cherry blossoms may be boring to some tourists, but Arami’s friendliness and Kabir’s excitement made for good conversation throughout the entire tour, which lasted three hours.

Each oppa adjusts his tour depending on the tourist’s interests. Arami, who was scheduled to meet a Taiwanese tourist after Kabir, said he was planning to ride a couple bike with her.

Since it was Arami’s first tour working for Oh My Oppa, there were some moments when he didn’t seem so sure whether what he was doing was the right thing. But overall, he was a good companion who could keep Kabir company in a foreign city.

She added, “However, I think the tour is a great opportunity for a tourist to meet a local, since it is very challenging to befriend locals during a short-term trip.”