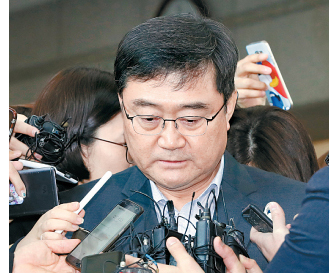 Samsung Securities may be facing a big bill for its so-called “fat finger” trading mistake last Friday. Its market value nosedived as the company and local financial authorities continued to scramble to find out the damage to investors.

An employee of the brokerage firm mistakenly sent 2.8 billion “ghost shares” to fellow employees instead of 2.8 billion won ($2.6 million) in dividends. While most of the employees realized a mistake had been made, 16 tried to profit from the blunder and offloaded about 5.01 million shares on the market.

An investigation has revealed that while the company sent out notices telling the employees not to sell the shares, six did anyway. One continued selling shares even after a third and final notice by the company of the blunder.

The company reportedly has decided to punish the 16 employees and demand they compensate the direct financial loss caused to the company, which is about 10 billion won.

But damages to other investors may be much greater.

According to statistics by the Korea Exchange, the number of Samsung Securities shares sold in the market on Friday was about 20.8 million, which is nearly one-fourth of the total number of the company’s shares traded in the market. In monetary value, the amount of shares sold Friday was about 785.1 billion won. The 5.01 million “ghost stocks” sold by the 16 employees were together worth about 200 billion won, which means institutional and retail investors decided to offload shares worth nearly 600 billion won because of the incident.

But while other analysts think the explosion in trading volume was panic selling by investors, the economist remained cautious.

“It could be the result of panic selling or simply investors trying to take advantage of the low price,” explained Hwang, which means some investors may have decided to short-sell when the price plummeted. In Korea, covered short-selling, where traders borrow a stock before they sell it short, is allowed while naked short-selling, which takes place without borrowing the shares, is prohibited.

“Authorities and the company must finish fact finding in order to figure out how many investors decided to panic sell and how much damage was done to them as a result,” he added.

Aside from financial damages to investors, the market value of Samsung Securities also took a nosedive.

As a result of the blunder, Samsung Securities’ plan to become a “mega-sized” investment bank may also be jeopardized.

The screening of Samsung Securities was put on hold when Lee Jae-yong, vice chairman of Samsung Electronics, was put in custody for alleged involvement in a bribery case that brought down former President Park Geun-hye in February 2017. He was later convicted of corruption and is appealing.

“In case we find anything illicit, we will take stern measures to punish related individuals and Samsung Securities in accordance with the law,” said Won Seung-yeon, senior deputy governor of the Financial Supervisory Service, which means that the brokerage could receive a warning or suspension of operations in the worst case scenario.

The National Pension Service, the biggest pension fund in Korea, stopped using Samsung Securities as its brokerage in the wake of the incident, citing concerns over the stability of its transactions. The Teachers Pension and Government Employee Pension Service also decided to tentatively suspend trading with the troubled brokerage house.