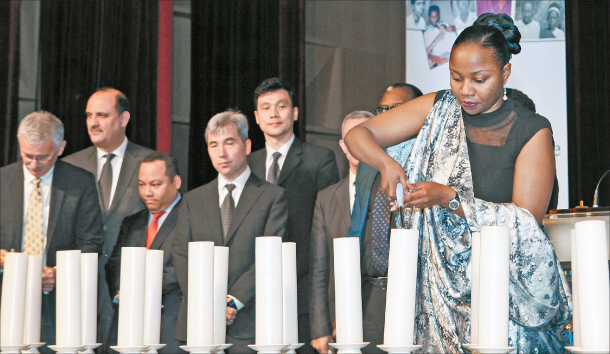 Emma-Francoise Isumbingabo, the Rwandan ambassador to Seoul, lights a candle to remember the victims and survivors of the 1994 Rwandan genocide at the Far East Broadcasting Company’s headquarters in western Seoul on Monday. The genocide is commemorated every year by the Rwandan diaspora. [PARK SANG-MOON]

About 100 Rwandans living in Korea commemorated the 1994 genocide on Monday at the headquarters of the Far East Broadcasting Company, a Christian station, in western Seoul.

“We come today with a spirit of mourning because of tragic loss in the land of Rwanda in 1994,” said Rev. John Kim, the executive director of the Far East Broadcasting Company’s Daejeon station who led the prayer service after a moment of silence.

“But we also come today with a spirit of hope and expectation, as we remember families and friends of loved ones and survivors … May we who are gathered today be people of peace so that no matter where we live in the world, we would embrace each other.”

The ceremony in Korea was part of worldwide commemorations that take place every year in Rwanda and diasporic communities to remember the 1994 genocide, which tore the African nation apart and took around a million lives in a span of three months. Participants of the ceremony - called Kwibuka, which means “to remember” in Kinyarwanda, one of the official languages of Rwanda - light candles to remember the victims and survivors.

“It has become a well-established custom that from [the] 7th to 13th [of] April of every year since 1995, Rwandans gather and remember the horrors and pains endured by their beloved ones during the terrible genocide that took more than one million innocent lives,” Emma-Francoise Isumbingabo, Rwandan ambassador to Seoul, told the people gathered at the auditorium of the broadcaster’s headquarters.

“Today is such a day; a day in which we, as a community of Rwandans and our friends, get together and share testimony and stories of courage and hope for a better future, a future in which atrocities like the ones that happened in the genocide won’t be allowed to happen ever again.”

Diplomats from different countries expressed their support for the Rwandan people and called them “symbols of hope.”

“The group of African ambassadors in Korea stand alongside the government and people of Rwanda to remember and honor the memory of victims, and to celebrate with dignity the survivors and their families,” said Carlos Victor Boungou, the Gabonese ambassador who is also the deputy dean of the African Diplomatic Corps in Seoul. “The UN General Assembly adopted a draft resolution in January designating the 7th of April as the International Day of Reflection on Genocide against the Tutsi in Rwanda in 1994 … The African Union has equally recognized it as the day of remembrance of the victims of genocide and African resolve to prevent and fight genocide on the continent.”

“I firmly believe that Rwanda, a nation that always remembers its past, has a bright future,” said Hong Jin-wook, director general of the African and Middle Eastern Affairs Bureau at Korea’s Ministry of Foreign Affairs. “In fact, the people of Rwanda have already begun to prove it … Since President Paul Kagame came into office in 2000, the country has experienced an average growth rate of 7 percent for the past decade.

“But there is a more important message that Rwanda sends to the world than the political and economic stability,” he said, “and that is hope. Rwanda is showing the way of hope for countries that are still suffering from internal division.”

About 100 Rwandans, students and diplomats participated in a walk from Hapjeong Station to the Far East Broadcasting Company’s headquarters on Monday as part of the commemoration. There are about 160 Rwandans in Korea, according to the Rwandan Embassy.

“Every country in the world [can] learn from the example of Rwanda,” said a Rwandan university student in his third year in Korea. “Because Rwanda, in the same way as Korea, happened to drag itself from the horrors of genocide and war and has become a prosperous country now.”

“To remember is to show our future to young children, the future of Rwanda, in order to know the wrong behind genocide and for the new generation to fight against genocide,” said another Rwandan student who lost his father in the genocide. “We faced many challenges after the genocide and it was very hard to face them. However, [in the end] … the challenges made us stronger.”