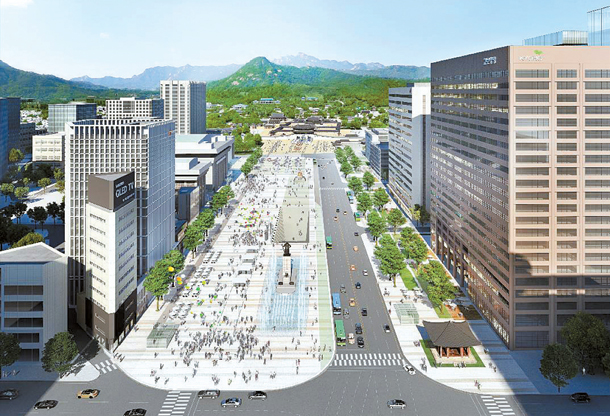 A computer-generated image of Gwanghwamun Square after planned renovations. The Seoul government wants to expand the square westward toward the Sejong Center and turn the road south of the palace gate into a pedestrian plaza. [SEOUL METROPOLITAN GOVERNMENT]

The Seoul Metropolitan Government unveiled its plan on Tuesday to triple the size of Gwanghwamun Square and install a pedestrian plaza outside the gate leading to Gyeongbok Palace in central Seoul.

“The plan is to expand the square 3.7 times its size by 2021,” the local government said in a statement. “It is to promote pedestrian connectivity in the area and restore the historical identity of the space.”

If the road is rerouted as planned by 2021, drivers taking a left turn near the palace gate will have to do so at the Gyeongbok Palace intersection, which is about 200 meters (660 feet) east of the three-way intersection at Gwanghwamun.

“We do not see an immediate concern as to how the traffic will be affected after the road is rerouted,” said Goh Heung-seok, head of the city’s transportation headquarters. “The 10-lane road that rings the square will be reduced to six-lane road, but we will ensure the public transportation lane remains exclusively used for buses and try to reduce traffic near the intersections in the vicinity to prevent severe traffic jams in the area.”

The city government and Cultural Heritage Administration, a government agency linked to the Ministry of Culture, Sports and Tourism, will be working together on the renovation.

“We will be splitting the cost,” Jin Hee-sun, head of the city government’s urban regeneration headquarters, said during a news conference at the National Palace Museum of Korea on Tuesday. “The Cultural Heritage Administration will probably take charge of the restoration of the pedestrian plaza and the city government the expansion of the square.”

During the Joseon Dynasty, kings used the space outside Gwanghwamun to hold public rituals. The practice was eliminated after Japan annexed Korea in 1910, and afterward, the space was given to vehicular traffic.

“In addition to restoring the terrace, we will bring back the figure of haetae [a mythical lion] that used to stand in front of the gate,” said Kim Jong-in, director general of the Cultural Heritage Administration. “We hope to restore this space that holds significant historical value.”

“The square is also the site of democratic movements and candlelight protests that gave birth to the current administration,” Seoul Mayor Park Won-soon said. “We had mulled over the plan on whether to create underground roads to reroute traffic in the area, but it required heavy investment, and we feel the current plan is the best way to both expand the square and preserve historical sites.”

Park added that the three-year project has nothing to do with his re-election bid. Park is expected to announce his run for mayor on Thursday. The next term lasts for four years.

“The local election has nothing to do with this project,” Park said. “The city government has been in discussions with local experts and the central government on how to restore and renovate Gwanghwamun Square for ages. This is just the right time to make the announcement.”