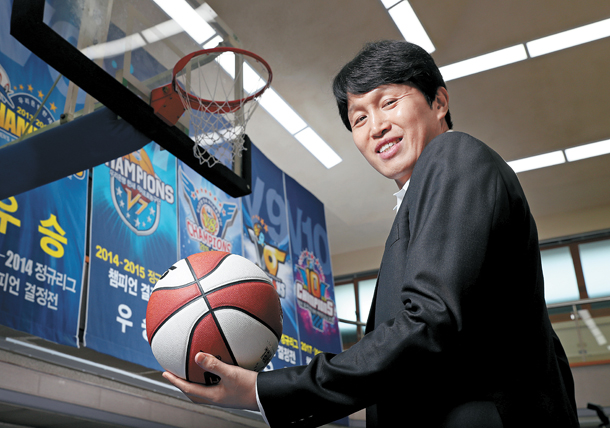 Wie Sung-woo, head coach of the Asan Woori Bank Wibee, poses with a basketball in Seoul on Monday. Wie led the Wibee to its sixth straight regular season and championship victories in the WKBL. [WOO SANG-JO]

Wie Sung-woo, the head coach of the Asan Woori Bank Wibee of the Women’s Korean Basketball League (WKBL), spent much of his professional career in the Korean Basketball League on the bench. Since he was appointed as the head coach of the Wibee, he led the team to both regular season and the championship series victories for the sixth consecutive year. Including his coaching career with the Incheon Shinhan Bank S-Birds, Wie has won 12 WKBL titles. 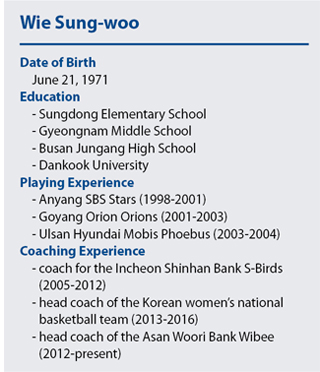 Since graduates from Yonsei University and Korea University dominate the professional league, Wie didn’t receive any attention from any of the KBL teams, as he graduated from Dankook University, which didn’t have a noteworthy basketball team.

When Wie started his professional career with the Anyang SBS Stars, now the Anyang KGC, in 1998, he was the team’s sixth man, coming off the bench when needed. After a short stint in Anyang, Wie played for the Goyang Orion Orions from 2001 to 2003 and for the Ulsan Hyundai Mobis Phoebus from 2003-2004. He still wasn’t able to advance his career further, as he was a bench player for the other two teams as well. After the 2004 season, Wie retired as a player with career statistics of 3.4 points per game in 201 games.

After his retirement, Wie started his coaching career in the WKBL. It was a perfect decision, as he led all the teams he coached to the top spot. Wie said his success as a coach came from his experience as a sixth man.

“In my professional debut game, I played for 10 seconds,” said Wie. “Right when there were 10 seconds remaining in the game, our starting player got kicked out for a foul so I was given a chance. It was a short period of time, but I clearly remember playing the best I could to leave no regrets. That’s the role of sixth man. It is true that the starting players have to lead the game, but it is the responsibility of the sixth man to fulfill the two percent that the team lacks in.”

Wie pointed out that giving an equal amount of attention to starting players and bench players allowed him to make teams into champions.

In the WKBL, Wie is considered one of the best coaches ever, as he led his team to six consecutive victories. Prior to his appointment as the Wibee’s head coach, he also helped the S-Birds to win six championship victories.

This season, the Cheongju KB Stars tried to defeat the Wibee with their super rookie Park Ji-soo. Just one great player wasn’t enough to beat the defending champions, and the Wibee finished the championship with three straight wins.

“The championship trophy is the result of our hard work and proves that our preparations for the season worked,” Wie said. “Instead of wanting to be the best, our players work harder to prove that their hard work pays off. There have been teams [in the WKBL] that have started tough training like us, but there hasn’t been a team that exceeded us yet. This shows that rather than the time spent training, it’s more important to understand the purpose of training and concentrate within the time given.”

Due to his successful career in the women’s league, after the end of each season, there have been rumors that Wie might move on to the KBL, but his answer has always been no.

“For now, [my goal is to] bring up the competitive level of Wibee so the other teams in the league can follow along, to eventually strengthen the women’s league [in Korea],” Wie said.