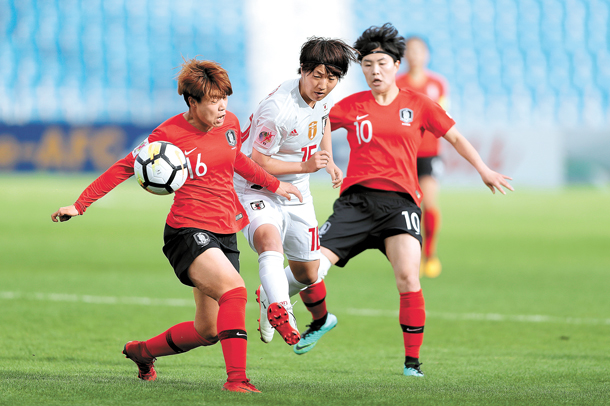 The Korean women’s football team, in red, fights for the ball during their Women’s Asian Cup match against Japan at Amman International Stadium in Jordan on Tuesday. [AP/YONHAP]

The Korean women’s football team coach said Wednesday that he was satisfied with their result against Japan at the Asian Football Confederation Women’s Asian Cup. 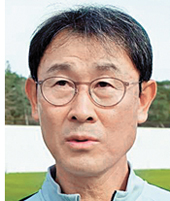 Yoon Duk-yeo’s squad played to a scoreless draw with defending champion Japan in their Group B match at Amman International Stadium in Jordan on Tuesday.

“We didn’t earn a bad result against a good team like Japan,” Yoon said. “Although we collected a draw, I think it provided us with an opportunity to grow.”

Korea, ranked 16th in the latest FIFA ranking, had an all-time record of four wins, nine draws and 15 losses against No. 11 Japan prior to their meeting in Amman.

The Women’s Asian Cup doubles as the final Asian qualifier for the 2019 FIFA Women’s World Cup in France, with the top five nations qualifying for the premier event in women’s football.

With the latest result, Korea is third in Group B with two draws. The team also had a 0-0 draw with sixth-ranked Australia last week.

Australia and Japan are tied at one win and one draw, with the former atop the group standings with better goal difference.

“Against Japan, we like to play attack football, so I asked Jung Seol-bin and Lee Geum-min to be more aggressive, and we had some decisive chances,” Coach Yoon said. “But it’s a pity that we couldn’t score goals.”

The coach, however, said it was a positive that they were able to collect a point from Japan.

“I must say earning a point was more important than scoring goals,” he said. “We’ve been targeting getting five points in three matches, so having two points at this moment is not that bad.”

Korea will wrap up its group stage campaign against Vietnam at King Abdullah II Stadium in Amman on Friday. Yoon’s team, however, will also have to watch the match between Japan and Australia to find out their World Cup fate.

Cho So-hyun, the team’s captain, said the players are looking to score as many goals as they can when they meet Vietnam.

“If we score lots of goals in the next match, I think we can pressure Australia and Japan,” she said. “We know the importance of the last match. If we don’t rush, I think we can score many goals.”