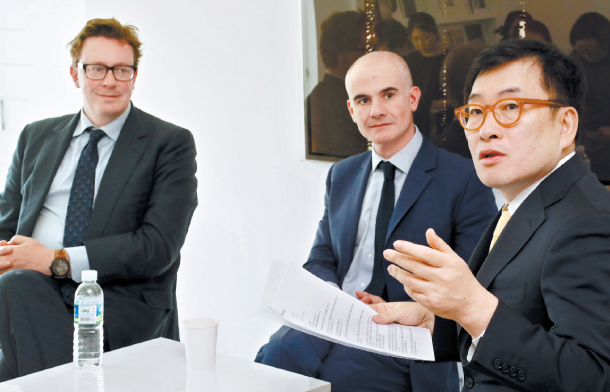 The upcoming sale of an art collection amassed by billionaire David Rockefeller and his wife Peggy will include not only paintings by modern masters Henri Matisse and Pablo Picasso but also some Korean antiques, executives of auctioneer Christie’s said in Seoul on Wednesday.

The Rockefeller collection sale, scheduled to take place for three days from May 8 to 10 in New York, has already been making a buzz around the world, as it could raise more than $500 million, the biggest amount for a single estate collection.

They said that the top record for an estate collection is now held by the sale of the collection of fashion designer Yves Saint Laurent and his partner Pierre Berge by Christie’s, which tallied some $400 million in 2009. 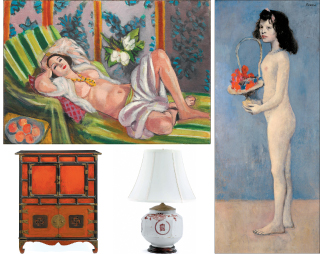 Clockwise from top left, Henri Matisse’s “Odalisque with Magnolias,” Pablo Picasso’s “Young Girl with a Flower Basket,” a Korean jar mounted as a lamp and a Korean red-lacquered cabinet are part of the Rockefeller collection. [CHRISTIE’S]

“Peggy and David Rockefeller at first focused on collecting European antiques but, later influenced by Alfred Barr, the first director of the Museum of Modern Art in New York, they began to collect modern art pieces in earnest in 1948,” Jordan said.

“They published written catalogues of their collection in the 1980s for educational purposes,” he added. “They can be a good model for new collectors including those in Korea.”

As for works from other cultures, the couple still focused on antiques. David Rockefeller visited Asian countries and collected Korean wooden furniture and ceramics, Clark said. The pieces that will go on sale on May 10 include a Korean jar mounted as a lamp and a Korean red-lacquered cabinet.

Among the highlights are Picasso’s “rose period” painting “Young Girl with a Flower Basket,” which has an estimate of $90 million to $120 million, and Matisse’s “Odalisque with Magnolias,” estimated to sell for between $70 million and $90 million, breaking the sale record for the artist.