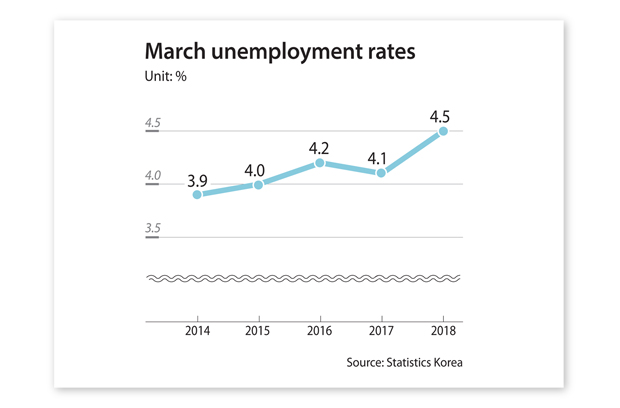 The unemployment rate in Korea hit a 17-year high for the month of March, according to government data released Wednesday.

The retail and service sectors experienced significant losses of jobs, raising concerns about the possible side effects of a minimum wage increase this year.

According to a report by Statistics Korea, Korea’s unemployment rate for March stood at 4.5 percent, up 0.4 percentage points year-on-year. March marks the second consecutive month that the unemployment rate remained above 4.0 percent.

Data showed that the number of people employed in wholesale and retail fell by 96,000 compared to a year before to 3.723 million, a 2.5 percent decline. In February, the work force in those industries tumbled by 92,000 year-on-year to 3.739 million.

Those industries, along with a part of the service sector defined as “business facility management, business support and rental service,” are considered sensitive to wage increases. Korea’s minimum wage was raised 16.4 percent to 7,530 won ($7.06) an hour this year, the largest increase in 17 years.

Together, over 250,000 jobs have disappeared in the wholesale, retail, accommodations and restaurant services businesses in the past two months.

An official from the statistics agency explained that while the minimum wage increase could have contributed to the rise in unemployment, there are a number of other factors that must be taken into account including a recent slump in the number of tourists, which showed a sharp drop in February despite the Winter Olympics taking place in Pyeongchang County, Gangwon.

Seasonally adjusted, the unemployment rate last month was 4.0 percent, the highest level in nearly a decade.

Along with an increase in the overall unemployment rate, the rate among young Koreans - ages 15 to 29 - also rose in March. The unemployment rate for young people was 11.6 percent in March, up 0.3 percentage points from a year earlier. In February, the rate was 9.8 percent.

Such discouraging statistics are expected to give more justification for the recent supplementary budget proposal made by the government as it awaits approval from the National Assembly.

The Ministry of Strategy and Finance on April 5 revealed an extra budget proposal worth 3.9 trillion won that focused on finding jobs for young people and providing support to regions hit by industry layoffs.

Of the 3.9 trillion won, 2.9 trillion is to be earmarked to help young people find jobs.