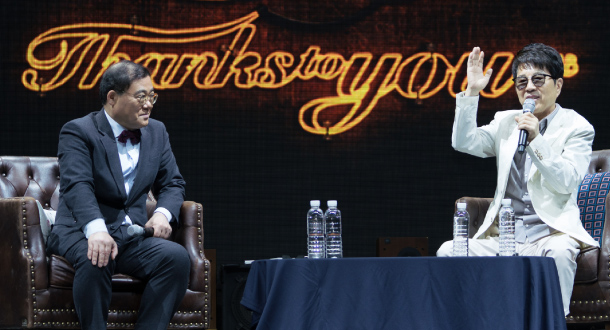 Veteran singer Cho Yong-pil may be 68 years old, but he still has swarms of female fans following him around like he’s a K-pop star. But what differentiates Cho from other singers in his age group is that his music also attracts young Koreans, even teenagers, thanks to the success of his latest album “Hello,” which he released in 2013. Songs from his 19th album such as “Hello” and “Bounce” topped music charts, pushing out younger K-pop stars like Psy from the list.

This year marks 50th anniversary of Cho’s debut, and to thank his fans for all of the love over the past 50 years, Cho is embarking on a tour across the country starting in Seoul on May 12. Cho debuted in 1968 as a member of a rock band called Atkins.

“The concert is titled ‘Thanks to You’ because I really want to thank the people for their love and support for literally half a century,” said the singer during a press conference held at Blue Square in Hannam-dong, central Seoul, on Wednesday. “I don’t know how to repay them for all the love, but people around me told me that I can do so by appearing on stage.”

Cho said he didn’t plan on holding concerts or doing anything special to celebrate his 50th anniversary as he is in the middle of working on his 20th album.

“I can’t really do two things at once. So when I decided to embark on the 50th anniversary tour, I halted work on my album and will resume after I finish the tour in June,” said Cho, deflating his fan’s hopes that there would be a new album in time for his upcoming concerts.

“I’ve completed about six to seven songs but I need to work on them a little more and write some more new songs, so it is very unlikely that I will release a new album this year,” Cho explained, adding that he won’t be performing any of his new songs at the concert.

However, the artist hinted that his new songs will be quite upbeat, hoping that they will again appeal to the ears of younger people.

“I am getting old and I can’t sing forever,” said Cho. “So I thought about what I should do to live forever with music and that was to have young people enjoy my music now. If a teenager enjoys my music now, he or she will remember my name even after I’m gone. That’s why I want to keep up with the trends and create music that can be loved by all generations.”