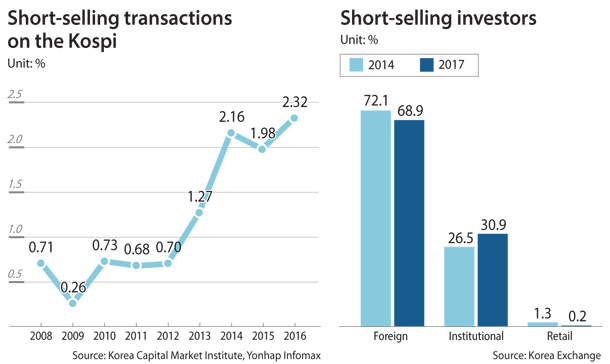 The widening “fat-finger” trading scandal at Samsung Securities is snowballing into a public movement to ban short-selling on Korean markets, as the investment tactic often causes huge losses to retail investors.

Authorities and economic researchers, however, are not calling for an outright prohibition on short-selling, highlighting its positive impact on market efficiency.

A public petition to prohibit all types of short-selling surpassed 210,000 digital signatures on Wednesday, only five days after it launched. That’s higher than the 200,000 signatures that the government says it needs to publicly address the issue.

Samsung Securities mistakenly sent 112.6 trillion won ($105.8 billion) worth of shares to its employees despite the shares being “ghost stocks” that didn’t exist.

“The point of this case here is how Samsung Securities’ system could allow a worker to issue excessively large amount of shares that didn’t exist, rather than the general problem of short-selling,” said Won Chong-hyun, a legislative researcher at National Assembly Research Service.

“But the reason why many members of the public are calling for a ban on short-selling is low trust for market players, as retail investors have long fallen victim to market manipulations that often involve the short scheme,” said Won, who works for the finance and foreign currency division at the state-run legislation and policy research institute.

Since a short is made on the assumption that a stock’s price will fall and will be purchased later at a lower price, retail investors who are not able to short-sell are, many times, ripped off by short-sellers’ gains.

In a notable incident from 2016, Hanmi Pharmaceutical’s shares nosedived ahead of the company’s announcement that the country’s largest drug maker was ending its partnership with drug maker Boehringer Ingelheim to develop lung cancer treatments.

Institutional investors profited big by shorting huge amounts of shares of the pharmaceutical company before the announcement that led to the sharp decline of the stock. The financial authorities confirmed next year that some of Hanmi’s employees leaked information to other investors, many of whom belong to financial institutions.

Celltrion, a biopharmaceutical company, is also a major target for short-sellers, partly because of the drug industry’s vulnerability to fluctuations. It moved from the secondary Kosdaq to the main bourse, Kospi, citing “the forces of short-sellers.” Still, short sales account for more than 10 percent of Celltrion’s transactions on the Kospi.

Due to the complexity of the process, the vast majority of short-sellers are institutional and foreign investors. Retail investors accounted only for 0.2 percent of short-sellers in 2017. Despite continued problems with short-selling, the nation’s financial regulators didn’t call for a ban.

“Blaming short-selling [for Samsung’s trading error] is not appropriate,” said Choi Jong-ku, the chairman of the Financial Services Commission. “Short-selling has a positive side on its own, so the argument for the ban is not right.”

Hwang Sei-woon, a researcher for the Korea Capital Market Institute, said that short-selling helps accurately evaluate stocks. “Short-sale transactions play an important role in helping to properly assess the prices of a stock by reflecting potential or existing negative factors,” he said. “It can also prevent price bubbles, although it has the risk of increasing volatility in the market.”

To prevent such accidents, Won called on the regulator to strengthen penalties for economic crimes and revamp its internal system, instead of banning short-selling.