Korea’s fine dust is made worse by China’s fireworks: Scientist

Korea’s fine dust is made worse by China’s fireworks: Scientist 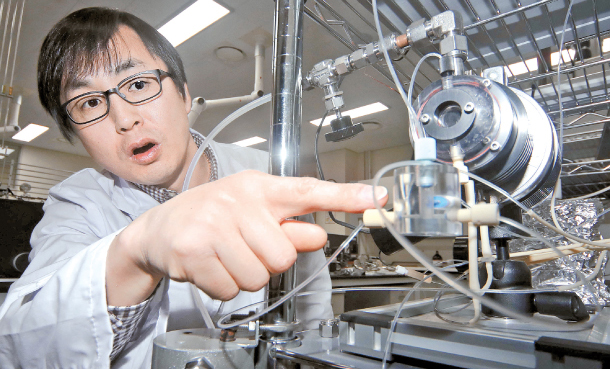 
Several Korean news outlets published stories last month on a scientific journal article that blamed China for the heavy fine dust that has blanketed the country for the past few weeks.

The article was written by a group of five Korean scientists from Korea Research Institute of Standards and Science (Kriss), led by Jung Jin-sang.

The article said that massive firework displays that take place in China during the Lunar New Year intensified the fine dust in Korea. Their findings were critical because they proved that remnants of fireworks in China are delivered right over the Korean Peninsula.

Their journal was reported in the global academic journal “Atmospheric Environment,” giving more credibility to their thesis. The response from Korean academic circles was that the journal finally proved that China was the main culprit behind fine dust here.

The JoongAng Ilbo, an affiliate of the Korea JoongAng Daily, recently met with Jung to hear more about the meaning of his recent findings and preferred measure to counterattack the current air pollution crisis.

Q. It was surprising that the journal was written by scientists from Kriss. How is the institute related to research on fine dust?

A.The institute conducts various research to develop measurement standards for technology that contribute to scientific research and industrial activities. It sets up standards for not only weight and length but also standard materials and tries to match them with global standards as well. My team is dedicated to developing standards for gas mixture density. I have worked on enhancing the credibility of standards for measuring dust density for the past six years.


How did your team come across the possibility of China’s fireworks being the source of fine dust in Korea?

When I was studying in Hokkaido eight years ago, I first thought about finding evidence that China was the main reason behind Korea’s fine dust. There was a study saying that heavy metals found in emissions generated in Korea differ from those generated in China. So I tried a similar route. But it was difficult to directly point out that China was the culprit because both China and Korea import oil from Middle Eastern regions and it was not easy to find a critical difference between the emissions generated in the two countries. I tried a more cultural and social approach. Six years ago, I found out that fireworks in China during their spring festival severely harmed the air quality.


Why did it take six years to prove it?

Fireworks generate potassium. But burning straw also causes potassium. Around the Lunar New Year holiday in Korea, a lot of farmers in the countryside burn stacks of straw. So I thought there was a possibility of the Chinese blaming the farmers in Korea for the high rate of potassium in Korea’s air. Then I thought I could use the fact that burning straw also generates a lot of organic material called levoglucosan. This material is rarely generated from fireworks. I thought if we exempt the increased amount in levoglucosan from the entire rate of increased potassium, we could prove the influence of China’s fireworks. Then it took more time because I needed to invent equipment that measures the density of different material in fine dust.


How can you say your recent finding is critical, as some people from Korea’s academic circle claim that they have long known that fine dust comes from China?

People in China have been claiming that there is no clear evidence proving that they are the culprits behind fine dust. Even after witnessing a satellite photo showing hazy air covering the western sea and the west side of the Korean Peninsula, they say the fine dust might have been generated by the sea. Officials from the Ministry of Environment say that they don’t have clear evidence to show Chinese officials when discussing about the fine dust rate in Korea. I think the finding is meaningful because we have at least come up with something that Korean government officials can put on the table.


Now it is evident that fine dust has come from China. What do we have to do now?


How does this research have to do with what we should do amid rising rates of fine dust here?

If the finding turns out to be true, it means that the emission rates in Korea should be decreased when pollutants generated in China come over to Korea. It means that policies on reducing fine dust in Korea have to be changed. Currently, the government has initiated an emergency reduction measure when fine dust from China gets stagnated in Korea.
This measure should be initiated preemptively before it starts to stagnate. This way, we can reduce the amount of polluting elements that could get attached to the particles while flying from China to Korea.


What should be done with Korea’s policies on researching fine dust and coming up with the right measures?

A lot of the time, people known as experts claim groundless things. They have to make claims based on scientific findings, but most of the time, their argument is more influenced by political issues. I hope climate experts carry out research on finding correlations between climate change and the fine dust rate. I think research that approaches diverse topics is needed.