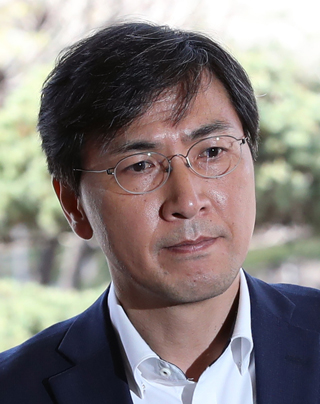 Prosecutors on Wednesday charged former South Chungcheong Gov. An Hee-jung with raping and sexually harassing his secretary multiple times in one of the highest-profile indictments stemming from Korea’s Me Too movement.

The indictment came one month after the secretary, Kim Ji-eun, appeared on a JTBC evening news program with allegations that An, a former presidential candidate, had raped her four times and sexually harassed her more often during the eight months she worked for him from June 2017.

A second victim came forward with similar allegations, but prosecutors said they lacked enough evidence to indict on those charges.

The woman, an employee at An’s political think tank, said An raped her three times between October 2015 and January 2017 and inappropriately touched her four times.

An, 52 and married with two kids, admitted to having sex with both women but denied the rape allegations, saying his relationships were consensual.

His lawyers told local media Wednesday that An remained “calm” after prosecutors announced their indictment and would “faithfully fight in court” to prove his innocence.

Prosecutors said Kim’s testimony was consistent throughout their investigation. Her acquaintances corroborated her account, saying she sought help from them while the harassment was ongoing.

According to prosecutors, about 10 days before the most recent assault in February, Kim searched online for materials related to Me Too.

On the second victim, who still remains anonymous, prosecutors said they could not indict because the testimonies were inconsistent.

Prosecutors also failed to bring an additional charge of bribery or graft. Kim claimed An raped her in an apartment complex in Mapo District, western Seoul, that was owned by one of An’s close college friends.

This raised speculation that An might face a bribery or graft charge because the friend admitted to allowing An to use the room for free since last August.

However, prosecutors said they could not indict because employees of the construction company that own the building also used the room.

An was considered a strong liberal contender in the next presidential election in 2022, but his political fortunes were shattered after Kim appeared on national television with her story on March 5.

The next day, An apologized and stepped down from his post as governor of South Chungcheong. The Democratic Party expelled him, and one week later, the second woman came forward with allegations of rape and sexual harassment.