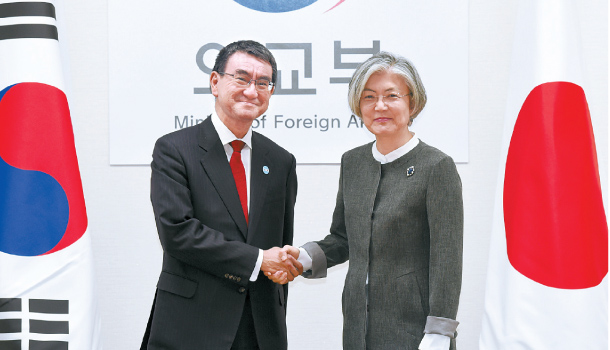 South Korean Foreign Minister Kang Kyung-wha and her Japanese counterpart Taro Kono stressed the importance of the upcoming summits involving Pyongyang in achieving the joint goal of denuclearization and establishment of permanent peace on the Korean Peninsula in bilateral talks held in Seoul Wednesday.

A Japanese foreign minister last visited the country in December 2015, and this marks Kono’s first trip to Seoul since he took the post as Tokyo’s top envoy last August.

The two envoys, according to Seoul’s Ministry of Foreign Affairs, emphasized building a future-oriented bilateral relationship along with joint coordination and communication among Seoul, Tokyo and Washington on how to resolve the North Korean nuclear issue.

Kono emphasized that Tokyo seeks a resolution to the North Korean nuclear and missile problem and the issue of the abductions of Japanese citizens by North Korean agents in the 1970s and 1980s, according to a senior Foreign Ministry official in Seoul. He expressed Japan’s hope that the issue can be raised at the upcoming summits, which he said are a “turning point.”

Kang was said to have replied that the “South Korean government has worked at and will continue to work toward humanitarian issues” such as the abduction issue, as well as that of reunions for families torn apart during the 1950-53 Korean War.

She continued, “However, at the current stage, aside from the three general agenda items of denuclearization, establishment of peace and advancing of inter-Korean relations, we do not know what kind of detailed agenda will be put on the table at the summit.”

Another diplomat who sat in on the discussions added that Kono called for the complete, verifiable, and irreversible dismantlement (CVID) and the “complete resolution to North Korean nuclear and missile problem.” Kono conveyed that Japan will “maintain pressure on North Korea until it shows its words as action on its commitment to denuclearize.”

Kang, the official said, replied that “until there is actual progress in denuclearization, pressure and sanctions on the North will continue to be maintained.” She emphasized the importance of maintaining the “momentum for dialogue as North Korea has declared it will not conduct any provocations while talks are ongoing.”

The South-North summit between President Moon Jae-in and North Korean leader Kim Jong-un is scheduled for April 27 at the truce village of Panmunjom at the inter-Korean border.

And Trump has said that a U.S.-North summit will take place in May or early June.

A summit between South Korea, Japan and China is also being scheduled for next month in Tokyo.

Kang agreed to share information with Japan on the inter-Korean summit, and Kono on the upcoming talks between Abe and Trump.

This year marks the 20th anniversary of the joint declaration on Korea-Japan partnership in October 1998 issued by then-Korean President Kim Dae-jung and Japanese Prime Minister Keizo Obuchi to build a future-oriented relationship. The two sides plan to draw up a blueprint for a “new partnership” to mark the 20th anniversary of the Korea-Japan joint declaration, and convene a director-general meeting soon to strengthen diplomatic relations, according to the Foreign Ministry.

During his two-day trip to Seoul, which kicked off Tuesday, Kono paid a visit to Seoul National Cemetery and met with Suh Hoon, director of Korea’s National Intelligence Service (NIS). Suh, a member of Moon’s special delegation to Pyongyang, visited Tokyo last month to brief the Japanese government on the results of the meeting with the North Korean leader. Kono also paid a courtesy call to Moon at the Blue House that afternoon.

Kono had a dinner meeting hosted by Kang, where they continued conversing about various issues including North Korea. His visit follows the Moon government’s announcement earlier this year that it will not scrap the 2015 deal about the Japanese military’s wartime sexual slavery.

The Moon administration conducted a review of the bilateral deal struck on Dec. 28, 2015, which included a Japanese government apology and a multimillion-dollar fund for the so-called comfort women victims, and concluded that the agreement was flawed and insufficient.

However, the Korean Foreign Ministry in January said that it would not scrap or renegotiate the deal, though it does not recognize the deal as a true resolution to the comfort women issue. The Foreign Ministry official said that Kono requested the “faithful implementation” of the deal. Despite facing challenges on historical and territorial issues, Kang emphasized cooperation in economics, culture and people-to-people exchanges.