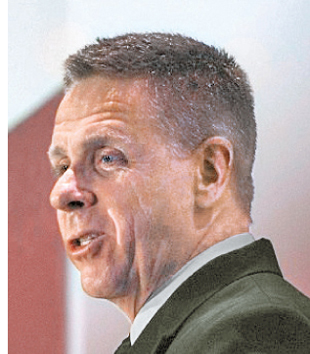 President Donald Trump has nominated Navy Adm. Philip S. Davidson to lead the Pacific Command, the Pentagon said in a statement Tuesday, in another reshuffle from Washington that could affect highly anticipated talks between the United States and North Korea.

In a short statement, the Defense Department said Davidson, who currently serves as commander of the U.S. Fleet Forces Command in Norfolk, Virginia, has been tapped for reappointment to the rank of admiral and assigned as commander of the Pacific Command, which includes the U.S. Forces Korea.

If Davidson receives confirmation from the Senate, he will be responsible for military operations in an area over 100 million square miles, or 52 percent of the earth’s surface, stretching from the U.S. West Coast to the Indian Ocean.

The outgoing commander, Adm. Harry Harris, who expects to retire in May, has been nominated to serve as the U.S. ambassador to Australia.

Davidson, a surface warfare officer, assumed command of the Fleet Forces Command in December 2014 and has been deployed across the globe in frigates, destroyers, cruisers and aircraft carriers, according to the U.S. Navy.

Trump’s decision to send Davidson to the Pacific Command goes against the long-held custom that the sitting commander of the U.S. Pacific Fleet is tapped for the job.

The Pacific Fleet’s commander, Adm. Scott Swift, announced late last year that he would retire from service after being told by the Navy that he would not be nominated to replace Harris.

No reason was made public as to why he was passed over, but there is speculation that Swift was being blamed for the fatal collisions between the USS Fitzgerald and a container ship last June, and the USS John S. McCain and an oil tanker in August, which resulted in the deaths of 17 sailors combined.

Gen. Vincent Brooks, commander of the U.S. Forces Korea, is expected to leave his post as early as this summer. His successor is not yet known.