The Korea Baseball Organization (KBO) on Thursday meted out punishment against a catcher who showed unsportsmanlike conduct toward an umpire. 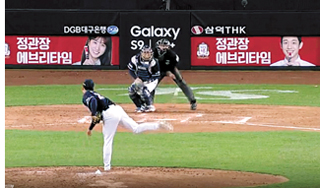 Yang Eui-ji, second from left, seemingly intentionally misses Gwak Been’s pitch during a game against the Samsung Lions at Daegu Samsung Lions Park on Tuesday. The umpire was nearly hit by the ball. [YONHAP]

The KBO, operator of the Korean pro baseball league, assessed Doosan Bears catcher Yang Eui-ji with a 3 million won ($2,800) fine and ordered him to complete 80 hours of community service in youth baseball-related activities for his misbehavior in Tuesday’s game against the Samsung Lions at Daegu Samsung Lions Park in Daegu, 300 kilometers (186 miles) southeast of Seoul.

Before the bottom of the seventh, new Doosan pitcher Gwak Been was throwing warm-up pitches. On one low pitch, Yang got up and moved to his right, making only a half-hearted sweep of the glove, and let the ball sail between home plate umpire Jung Jong-soo’s legs. Yang could have caught the ball from his sitting position, but instead the ball took one hop behind Jung and hit the backstop.

Following the incident, Yang was embroiled in a controversy that it was a premeditated attempt to let the ball nail Jung in revenge for an earlier call. At the top of the seventh, Yang expressed his displeasure at a called strike during his at-bat. He ended up striking out swinging, though he didn’t argue with Jung as he returned to the dugout.

Yang later said he lost sight of Gwak’s pitch momentarily and couldn’t catch the ball. The incident, however, was reported to the KBO’s discipline committee for judgment.

The KBO said it decided to punish Yang for creating a situation that should not happen on the field regardless of his intention.

“Most experts expressed that Yang would not have done it on purpose to harm the umpire since there are many cameras and fans watching at that time,” said KBO Secretary General Chang Yoon-ho. “After the incident, Doosan manager Kim Tae-hyung summoned Yang back to the dugout and warned him and Yang also looked remorseful for his action.”