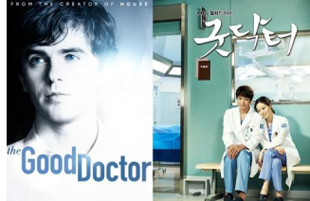 “The Good Doctor,” a U.S. remake of the Korean drama of the same title, aired its finale on March 26 and promised to return for a second season.

Hollywood Reporter reported March 27 that the series wrapped up “ABC’s strongest freshman drama season in 13 years, with an average 15.4 million viewers tuning into each episode with time shifting.”

On March 7, the American network announced a plan to make a second season, without giving many details. According to KBS, which holds the rights to the original, the sequel will have 18 episodes and is likely to start production in July.

The original Korean show aired on KBS2 from August to November 2013. The show, starring Joo Won, Moon Chae-won and Joo Sang-wook, centered on a young autistic savant surgeon, who is recruited into the surgical unit of a prestigious hospital.

The American adaptation premiered on Sept. 25, with an original plan to air 13 episodes, but it extended the series by five more episodes on the back of strong viewership ratings.

TV by the Numbers suggested the next season should be moved to 10 p.m. Tuesday from the first season’s Monday broadcasting schedule, citing the Tuesday time slot’s traditionally poor performance. Yonhap