Local shipbuilders get ready to rebound

Local shipbuilders get ready to rebound 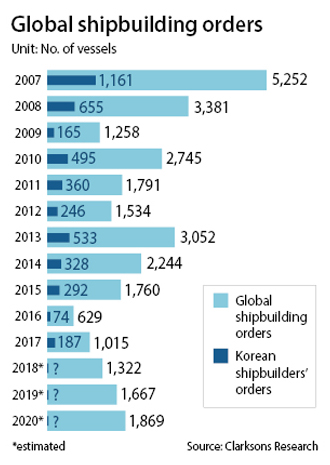 The shipyards of Korea’s southeast coast may soon be teeming with activity again, as a major industry research firm said last week that the global shipbuilding industry is heading for a recovery.

U.K.-based shipbuilding and marine tracker Clarksons Research said the main driver for growth will be increasing demand from emerging economies such as China, India and Africa and the scaled-down production capacity of global shipbuilders due to their continued restructuring.

If the forecast proves to be true, it will be a big relief for Korean shipbuilders, which have suffered from a lack of orders over the past decade. The positive prediction is supported by industry insiders.

Tighter environmental regulations by the International Maritime Organization are expected to have a huge impact on the shipbuilding industry. The IMO announced in 2016 that ships will have to use marine fuels with a sulfur content of no more than 0.5 percent from January 2020, a major change from the current limit of 3.5 percent. The organization hopes to cut greenhouse gas emissions with the new cap.

For shipbuilders, this means they have to change their marine fuels from cheaper options such as bunker C oil to more costly but cleaner marine gas oil or liquefied natural gas. However, ships need their engines to be reworked before they can accept a different fuel. Another way to meet the new IMO standards without changing fuels is attaching a device called a scrubber system to reduce the amount of sulfur oxide emanating from ships.

“Ships are used for roughly 20 to 30 years before they are retired,” said Park Jun-su, a public relations manager at Hyundai Heavy Industries. “Considering the long-term cost of equipping and maintaining scrubber systems, we can expect demand to increase from shippers wanting to change their ships to new models designed to meet [IMO] guidelines.”

Increases in orders for offshore plant construction could also boost demand for ships. Offshore oil rig construction was highlighted as an effective alternative for shipbuilders, as ship orders slumped after the 2008 financial crisis and oil prices soared.

Offshore oil rig orders are closely linked to crude oil prices. Orders surged from 2011 through 2013 when oil prices were over $100 per barrel. Korean shipbuilders inked massive offshore rig orders then, but soon suffered from order delays and cancellations as oil prices dived below $30 per barrel. Oil prices rebounded to around $60 a barrel recently, which industry watchers say is enough for offshore rig builders to see stable profits.

Continued restructuring efforts over the last 10 years have led to many shipbuilders downsizing or even shutting down. The decade-long order drought was difficult for shipbuilders all over the world. Among the roughly 400 global shipyards, 167, or over 40 percent, didn’t sign contracts for any new orders in 2016.

As Korean shipbuilders managed to endure, they were able to win the most orders in the first quarter of this year, beating second-place China. According to Clarksons’ data, Korean companies won orders to build ships measured at 2.63 million in compensated gross tonnage (CGT) during the January-March period. During the same period, Chinese rivals won 1.96 million CGT orders and Japanese won 800,000 CGT. CGT is an indicator for the amount of work necessary to build a ship considering ship tonnage as well as vessel types and other factors.

Considering that global orders amounted to 6.23 million CGT during the last quarter, Korean shipbuilders’ won roughly 42.2 percent of the world’s projects, followed by China with 31.5 percent. The amount of orders placed is more than double the orders for the first quarter of 2016.

The Korean government recently stepped in to give another boost to the local shipbuilding industry. In a support package announced last week, the government said it will spend 3 trillion won ($2.7 billion) to help domestic shipping companies buy as many as 200 ships from Korean shipbuilders.

For the time being, Korean shipbuilders are still just getting by. Hyundai Heavy Industries is set to solicit voluntary resignations next week from employees who have worked for the company for 10 years or more.