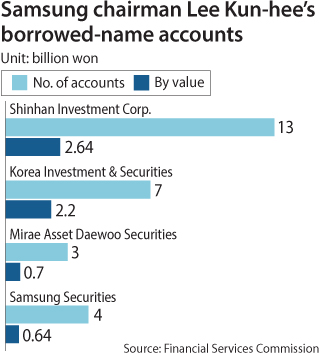 The penalty for the accounts, which used the names of former and current Samsung executives, came 10 years after they were first revealed by a special prosecutors’ investigation of Lee. The statute of limitations for levying a fine on an account opened under someone else’s name ends this month.

In addition to the penalty, the government said it told Lee, who has been bedridden since he suffered a stroke in May 2014, to change the accounts to his name.

According to the Financial Services Commission on Thursday, the 27 financial accounts opened up at Shinhan Investment, Korea Investment & Securities, Mirae Asset Daewoo and Samsung Securities were valued at 6.18 billion won in August 1993, when the Real Name Financial Transaction Act went into effect after a presidential decree.

Today, the amount stashed in the 27 accounts is estimated to be around 250 billion won. However, the government decided to set its penalties based on the 1993 value.

The penalty for the brokerage firms is 50 percent of the value of the accounts, plus 10 percent in additional fines for a total of 3.4 billion won.

Although the special prosecutor’s investigation in April 2008 found 1,229 bank accounts owned by Lee under borrowed names, the government decided to only penalize the 27 accounts that were made before the real-name financial transaction system was adopted. Under the law, only accounts that were opened before August 1993 can be penalized.

Previously, the FSC claimed that there were no violations of the law on accounts made under other people’s names, as they were opened under real names, regardless of who the actual owner was. The law specifically bans accounts that were opened under borrowed names.

However, the situation changed after the Ministry of Government Legislation in February concluded that the FSC should fine those who failed to change their accounts under borrowed names to the names of the actual owners.