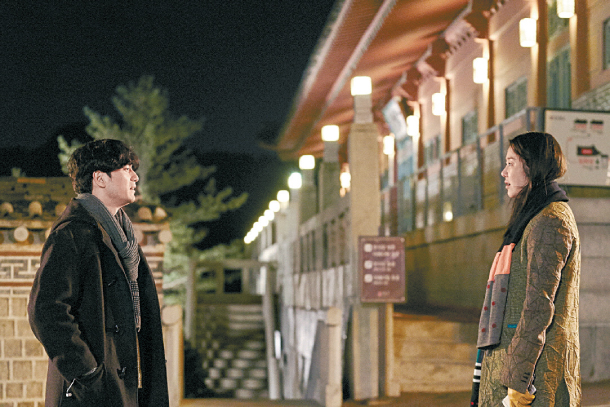 Scarier than running into a tiger on the street may be encountering an ex-girlfriend at your worst. As though that’s not enough, Gyeong-yu from “A Tiger in Winter” is being paid to drive his intoxicated former girlfriend home after a night of drinking. Released Thursday, the drama from the former assistant of Korean auteur Hong Sang-soo depicts hope through the reunion of a former couple.

The movie starts with the news that a tiger has escaped from a local zoo. The story builds when former aspiring novelist Gyeong-yu (Lee Jin-wook), who now makes a living working several temp jobs, is asked by his girlfriend to move out from her place for several days, only to discover later that she has unilaterally broken up with him without telling him why. Now homeless, Gyeong-yu hopes to stay at his friend Bu-jeong’s place, but is forced to move out when he learns that Bu-jeong’s girlfriend will soon move in.

Right when he isn’t sure where to go next, Gyeong-yu’s ex-girlfriend Yu-jeong (Go Hyun-jung), now a successful novelist that he encountered a few days ago, invites him to stay at her place, saying that she needs an inspiration to overcome a creative block.

Although Yu-jeong gained fame through writing, unlike Gyeong-yu, the pair shares unsure feelings about their future.

At two points in the film, Gyeong-yu encounters the face of a tiger. The first time, Gyeong-yu sprints away in fear, while during the second encounter, he directly confronts it and looks into its eyes while firmly gripping onto his pen and notebook.

The tigers in the film represent fear, which, for Gyeong-yu, is writing. The film implies that everyone has his or her own fears, and that it is a matter of whether the person is brave enough to confront that fear.

“I wanted to reflect times when I ran away from my fears,” said director Lee Kwang-kuk.

Although the flow of the movie is not always smooth and has several vague and unexplained scenes, the two main actors lead the story in a down-to-earth tone.

The film is rated 15 and above.