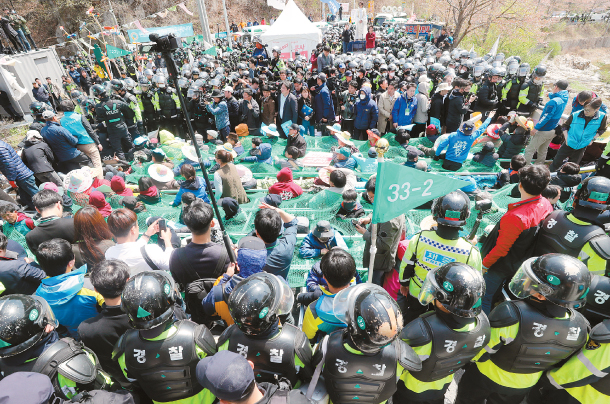 Residents near the Thaad missile defense base in Seongju County, North Gyeongsang, clash with police on Thursday, protesting against the transport of construction materials and equipment into the area. [YONHAP]

Tensions soared once more in Seongju County, North Gyeongsang, where the Terminal High Altitude Area Defense (Thaad) system is deployed, as the Ministry of National Defense attempted to send in construction equipment, clashing with villagers who blocked it.

The Defense Ministry initially planned to send in 15 vehicles, including eight trucks of sand and gravel, for additional construction work at the site of the U.S. Forces Korea’s Thaad unit.

They failed to deliver the equipment and material due to a fierce backlash by local protesters.

Some 150 residents and members of civic organizations opposed to the Thaad deployment gathered starting at 4 a.m. to stage a sit-in around Jinbat Bridge, blocking the road leading to the entrance of the antimissile battery site, a former golf course.

Some 3,000 police officers were dispatched to secure the roads around 7 a.m. to prepare for the deliveries. Police broadcast warnings to the protesters to disperse more than eight times, and starting from 10:35 a.m., police tried physically removing people from the road.

The protesters made makeshift grids out of long aluminum bars placed on their laps, and covered themselves with green nets for extra protection against police. The metal bars and nets helped lock them together and foiled police attempts to pull them away one by one.

The organizers estimated that there were at least 10 people injured during the altercation between police and protesters. Two villagers had their ribcages broken and were transferred to the hospital.

The group of six civic organizations includes locals from Soseong-ri, a village in Seongju County, the nearby city of Gimcheon, as well Won Buddhists, and has led to negotiations with the Defense Ministry on issues related to the Thaad base.

Police, worried about further accidents, ended efforts to break up the rally by noon.

Afterward, Defense Ministry officials and a group of civic organizations who opposed the deployment of Thaad came to an agreement to allow construction equipment already stationed at the site to be taken out on Thursday.

The road was cleared for the withdrawal of the construction equipment from the Thaad base around 2 p.m., some seven hours after police initially began attempting to clear the road of protesters.

But it failed in making delivery of equipment and materials for further construction to improve conditions for the troops at the Thaad base, including repairs of leaking roofs and the building of new sewage facilities.

The golf course was acquired from Lotte Group and turned over to U.S. Forces Korea last year. U.S. Forces Korea began installing key components of the Thaad battery in April 2017 and finished the deployment last September. Residents of the area have protested the deployment ever since the rural village Seongju was selected as the site of the Thaad system in late 2016.

Some 400 U.S. and Korean soldiers are stationed at the Thaad base.

One Army officer said, “We are in dire need of construction work to repair leaking roofs ahead of the monsoon season. Several days ago, it rained and water leaked through the roof. It will take around three months to complete construction work.”

The locals say they are not opposed to construction work to improve the living quarters.

They asked the Defense Ministry to allow one resident to check that the repair work is indeed happening in the living quarters of the troops. The ministry rejected the request and negotiations on Wednesday broke down, leading to the altercation between police and locals the next day.

The Defense Ministry said later that it will resume negotiations with the civic groups over delivering the construction equipment on Monday.

Police were dispatched to secure the road leading to the Thaad base three times last year and once this year. Each time, there have been clashes with locals and civic organizations.

The Defense Ministry also delivered construction equipment to the base in November last year, and at that time dispatched some 5,000 policemen to secure the roads amid protesting residents. Several people were injured in the process.

Some residents say tensions over the Thaad system must end.

“There is a clash whenever equipment related to the Thaad launchers is delivered to the base, resulting in injuries, and such a situation needs to stop being repeated,” said a 56-year-old resident of Seongju surnamed Choo. “The Defense Ministry and police and related civic organizations and residents need to take a step back and try to resolve the issue through dialogue.”