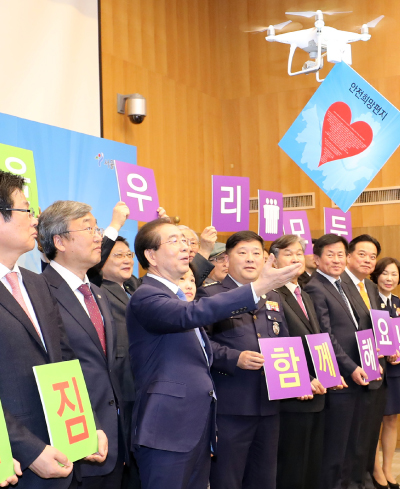 Seoul Mayor Park Won-soon, third from left, speaks at a news conference on urban safety at the Seoul Metropolitan Government’s Seosomun building in central Seoul on Thursday after announcing his bid for a third term. [YONHAP]

Seoul Mayor Park Won-soon announced his bid for a third term on Thursday, promising to invest 1.2 trillion won ($1.1 billion) in start-ups and put more than 80,000 electric cars on city roads by 2022.

“I became Seoul mayor six years ago, and all those years, if there was one thing that I did, it was to make the people of Seoul the priority in all policies,” Park said at the headquarters of the Democratic Party in western Seoul. “I hope to complete the 10-year revolution where, by 2022, Seoul citizens will be able to say they are living a healthy, free, fair and loving life.”

Park was elected mayor in 2011 when Oh Se-hoon stepped down just one year into his second term following the failure of his free school lunch campaign. The mayor, a former activist, proved popular and was re-elected in 2014. His two terms together have lasted more than six years. A typical Seoul mayor serves four years, and no one has served three terms.

“The past six years have been a whirlwind of revolutions, as the city government adopted free school lunches, halved the tuition at the University of Seoul, reduced the city debt by 8 trillion won and made part-time employees full-time,” Park said. “But there is more to be done for both the young and old in Seoul, and we will do it together with the Moon Jae-in government.”

Park’s election pledges include strengthening ties between Seoul and Pyongyang. “The Korean Peninsula is on a path toward peace and prosperity, and Seoul intends to pursue exchanges with Pyongyang,” Park said. “[If I am elected,] I will host the 100th National Sports Festival in 2019 together with Pyongyang as well as joint soccer matches and orchestra performances.”

Park also highlighted smart city development plans. “We will try to create more green spaces throughout the city,” he said. “Seoul will be reborn as a smart city in this age of the fourth industrial revolution. We will create a 1.2 trillion won fund to invest in start-ups and use smart technology to battle security issues, fires, disasters and the fine dust problem.”

Within the Democratic Party, Park is running against Park Young-sun and Woo Sang-ho, both representatives in the National Assembly.

In 2011, Ahn had planned to run but withdrew to prevent taking away votes from Park Won-soon, guaranteeing Park’s win.

“We have special relations, Ahn and I,” Park said. “And I am always thankful for his action in 2011. But since then, there have been many political changes, our paths are different. I am running for the position as a member of the Democratic Party, with the vision and identity of the party.”