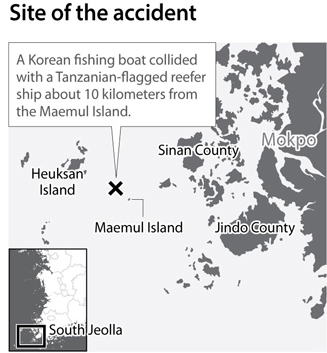 Three sailors were killed after a Korean fishing boat collided with a Tanzanian-flagged reefer ship off the country’s southwestern coast early Thursday morning.

Three other crew members remained missing as of Thursday evening.

The 15-ton Korean boat, the Yeongheung, crashed into the 498-ton Xing Yue at around 12:37 a.m. off the coast of Sinan County in South Jeolla, the Korean Coast Guard said. The boat, which had six crew members on board, then capsized about 10 kilometers (6.2 miles) northwest of Maemul Island.

One sailor was found at around 1:25 a.m. by fishermen who were alerted by the Coast Guard. He was not breathing and did not have a pulse. He died soon after.

The Coast Guard arrived at the scene at around 1:34 a.m.

Two more sailors were found dead inside the capsized fishing boat at 8:26 a.m. and 8:37 a.m. by the Coast Guard’s special rescue unit. They then transferred the three bodies to a hospital in Mokpo, South Jeolla, to identify them.

Five officials from the National Forensic Service were also dispatched to the scene to analyze the cause of the accident, and the Coast Guard deployed a response vessel to contain any possible oil leaks. The Yeongheung was carrying about 2,000 liters (530 gallons) of diesel fuel when it departed from a port in Sinan County on Wednesday.

The South Jeolla Provincial Government set up a situation room immediately after it was notified of the accident to coordinate a search for the missing sailors.

There were no reported casualties among the five crew members aboard the reefer ship. The Coast Guard is interviewing the crew for more details about the accident.

The Jindo Vessel Traffic Service Center said the two vessels appeared to overlap at around 12:29 a.m. and lost signal from the Yeongheung at 12:37 a.m. It immediately contacted the Coast Guard.

Kim Boo-kyum, minister of the interior and safety, convened a meeting at the central disaster and safety situation room at the government complex in Sejong. Kim Young-choon, minister of oceans and fisheries, and Park Kyung-min, commissioner general of the Coast Guard, were also present.

The interior minister called for all-out efforts to find the missing crew members and requested their families be contacted and informed about the accident.

Fishing boats frequently collide with large vessels in Korean waters. Last December, 15 sailors were killed after a fishing boat collided with a tanker near Yeongheung Island in Incheon. Another fishing vessel on March 6 capsized and killed four and left four missing off the coast of Tongyeong, South Gyeongsang.