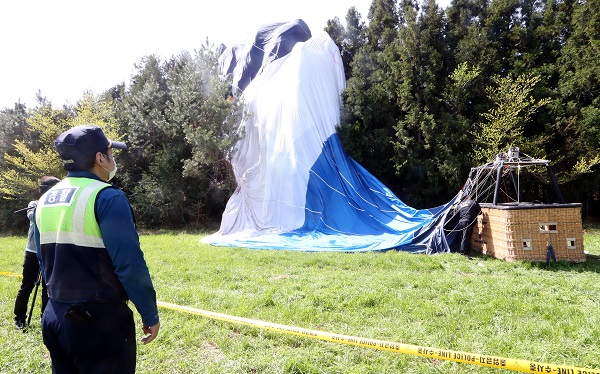 A police officer examines a hot-air balloon after it crashed into a ranch in Seogwipo, Jeju Island on Thursday morning. The pilot was killed, and 12 passengers were injured after the balloon collided with a tree. [YONHAP]

A pilot died after a hot-air balloon carrying 13 people crashed into a ranch on Jeju Island on Thursday morning.

The balloon was preparing to land just north of a volcanic cone in the city of Seogwipo at around 8 a.m. when it collided with a tree and fell to the ground, according to firefighters who arrived at the scene. Strong winds then sent it tumbling for about 100 meters (300 feet).

The pilot hit his head trying to prevent the collision and fell unconscious. He went into cardiac arrest en route to the hospital and died shortly after arrival, according to rescue workers.

The 12 passengers suffered only minor injuries. Some had tried to escape during the crash while others were thrown to the ground. They were transported to multiple hospitals in Jeju City and Seogwipo.

Residents near the accident site said they heard several loud noises before the balloon crashed to the ground. They reported it to the Jeju Dongbu Fire Station, about 28 kilometers away, and the station immediately dispatched a crew.

The 35-by-30-meter balloon, owned by a tour operator called Oreum Balloons and manufactured by a British company, had passed a safety test by the Korea Institute of Aviation Safety Technology last July. At the time of the flight, it was not violating any capacity rules because the balloon could seat a maximum of 17 people.

But other tour operators on the island said they had already expected a crash like this to happen.

Jeju’s strong winds as well as the island’s many wind turbines and power lines pose obstacles for hot-air balloons. The Jeju Regional Office of Aviation had previously tried to prevent Oreum Balloons from starting its business three times, but the city approved its license in 2015.

This is the second time a hot-air balloon has crashed on Jeju Island. In April 1999, a balloon flew into a power line and crashed into the ground, killing one and injuring four.