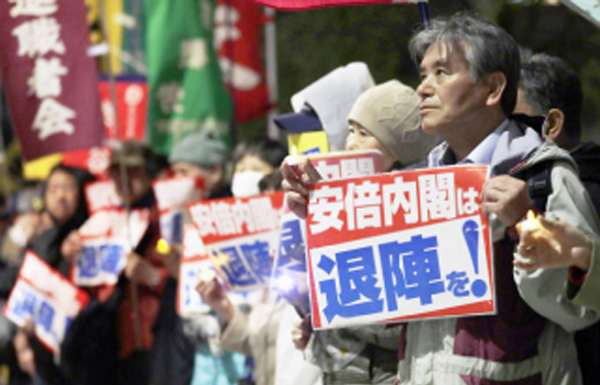 *The author is the Tokyo correspondent for the JoongAng Ilbo.


The district of Kasumigaseki in Tokyo is where many ministries’ offices are located. Among them, the Ministry of Finance is considered the most powerful. The shape of the building from above resembles one of the Chinese characters for Japan, and ministry officials take pride in calling themselves “Japan itself.”
The ministry has insurmountable influence because it has the power to allocate spending and gather information from other ministries. Lately, though, its prestige has been undermined by a series of scandals.

Mitsuru Ota, head of the ministry’s Financial Bureau, recently testified before the legislature, where he appeared flustered and repeatedly bowed his head in apology. Ota admitted that a ministry official had coordinated with Moritomo Gakuen, a private school operator, on a deal to sell state-owned land to the company at a lower price in February. One lawmaker went as far as calling Ota “stupid.” The moment shook the pride of a high-level Finance Ministry official.
Two weeks earlier, Nobuhisa Sagawa, former head of the National Tax Agency, appeared before lawmakers. His attitude was completely different. Revelations had surfaced that the ministry fabricated a trove of documents related to the deal, but he avoided answering any sensitive questions “out of fear of criminal prosecution,” he said.

But then why and for whom would elite officials commit unlawful acts? Japanese people who watched his appearance on television said the Ministry of Finance was completely broken. They felt ashamed.

The Finance Ministry began to crumble at the start of Prime Minister Shinzo Abe’s second cabinet in December 2012. The leader concentrated power in his office, with the key lever being control of the Finance Ministry. His government took over personnel appointments, ministry officials were bypassed intentionally and those from the Ministry of Economy, Trade and Industry were promoted and kept close to Abe.

Naturally, information flew into Abe’s office, not the Ministry of Finance. A bureau head who spoke up about the Moritomo Gakuen scandal last year had to leave office, but another bureau head who ardently defended the administration was put on a fast track for promotion. That bureau head was none other than Sagawa, the tight-lipped former tax agency head.

The fall of the Finance Ministry is a case study of the bad outcomes that can arise when bureaucratic organizations are controlled by politics. Korea has learned from the precedent of ousted President Park Geun-hye about the consequences that arise when an executive leader has overbearing control over bureaucrats and uses power for personal interests.

In any country, politicians and bureaucrats need to maintain a certain distance and balance.